Mark Of The Highlander

Mark of the Highlander
The MacLomain Series
Next Generation

I'm proud and pleased to have, as my special guest on the Flight Deck again, best selling author, Sky Purington.  Sky has been my on-line friend since I was first published, back in 2008, and if you haven't read her books, you're missing a treat! Do give them a try, you won't be disappointed. And don't forget to leave a comment and enter the Rafflecopter contest at the end of this post.

So, make yourself comfortable, order something sparkling from the replicator and let's get started.  Over to you, Sky!

Thanks so much for hosting me today, Lyn! It’s always such a pleasure to visit your beautiful blog, my friend. Today I’m excited to share my latest release, Mark of the Highlander, book one in The MacLomain Series- Next Generation. What better way to celebrate than to reflect upon what inspired The MacLomain Series. In fact, this December I’ll be celebrating the ten year anniversary starting point of this particular series.

I still remember autumn of 2004 as though it was yesterday. My husband and I had decided to spend the weekend at the Highland Games here in New Hampshire. Always proud of our Scottish heritage, we made a point of looking for our clans at the event. My clan, the Brouns (AKA- Browns) made a mighty showing. One of the largest participating clans that year they streamed onto the field kilted and proud as the bagpipes played. It was one of the most profound moments of my life.

My husband’s clan, however, was a little trickier to locate and meant investigating the many tents erected for information. The sad truth of it was we could only locate them in history books. The most modern name for his clan was Lamont but had once been known as first MacKerracher then MacLomain (though that isn’t mentioned in the article source). The truth was we’d almost lost them all in the infamous Lamont Massacre. Learn more about that HERE. What I found most interesting when researching both the Broun and MacLomain clans was their alliance. As it turns out, the two clans had been intermarried for three hundred years during the medieval period.

It was that day, with bagpipes echoing off the New Hampshire mountains, that the premise for The MacLomain Series was born. There was nothing more romantic than the idea that two clans who had been interconnected so long ago had once more come together when I fell in love with my husband.
I adored the idea of time traveling between my home state and medieval Scotland so I was off and running. After two months of research I typed those first few words of Fate’s Monolith. Since then the story has now stemmed through the original MacLomain Series to The MacLomain Series- Early Years. Now I’ve launched the next generation which will be a five book series. Once finished, the MacLomain clan will count eleven tales in total. Not to say holiday stories are off the table! *winks*

The Next Generation series not only introduces many new characters but welcomes guest appearances from several of the characters from the previous two series. Also, in this new run of books I’ll be introducing something brand new. I can’t say what but it will definitely appeal to my fantasy loving fans!
It’s been so great to pop in and share a bit more about my MacLomain’s. Thanks again for having me over, Lyn!

This sounds amazing, Sky, can't wait to read it, and how fascinating to learn how the MacLomain series was born!

Up and coming novelist sensation, McKayla never could have imagined that the medieval Scottish Highlands she wrote about were anything more than pure historical fiction. But little did she know that her Broun ancestry would prove an irresistible pull for one very remarkable highlander.

Colin MacLomain, skilled assassin and fierce warrior, is ready to make right his jaded past. Newly seated as
chieftain, he's determined to win over his clan and one true love. But when she's pulled back in time will McKayla, his unknowing best friend, be able to see past his shaded history to the man he's determined to become?

Find out in Mark of the Highlander. 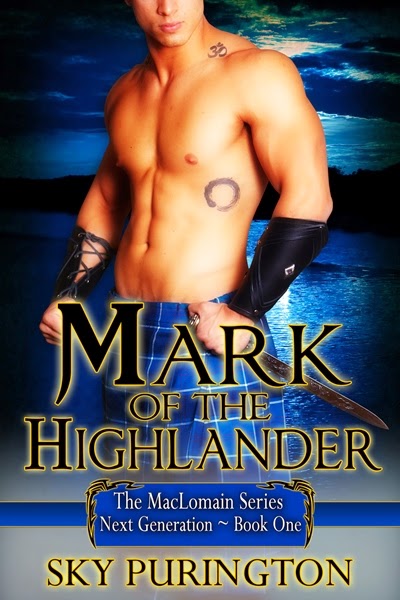 Though they stood a good foot apart they might as well have been entwined with all the attraction crackling between them. He arched a brow and though he didn’t move toward her, his words certainly yanked her back against him. “More muscles. Far more strength. A tireless perseverance that I promise will make you weep.”

She licked her lips and tried to look away. Impossible. He looked so bloody good standing there in a plaid with the mountains cheering him on and the highland wind working fully to his advantage.

“You have no idea how hard it was for me to transform my feelings into something platonic. But I did. This. You.” She made a loose gesture in his direction. “Reignites old wounds.”

Colin nodded and instead of continuing to undress her with his practiced eyes he grabbed her hand and pulled her towards him.

“So let’s start over, Kay, sorry, McKayla.” He squeezed her hand. “I promise not to call you that until I earn back your trust. I dinnae deserve that level of closeness. Not yet. But I promise you one day I will. I want to earn back not only what I lost when I ended our relationship but what I lost because of all the lies. While I beg for my clan’s forgiveness, allow me to ask for yours as well, a thousand times over.”

A small shiver rippled through her. Did he really crave her forgiveness as much if not more than those who raised him? His very family? It was hard not to be humbled because she knew he was being truthful. She wasn’t being naïve, not this time. He meant it. Regardless, he wasn’t getting off that easy. “Let’s work at rebuilding the friendship and not worry so much about the relationship, okay?”

Colin nodded and led her into the forest. “Seems like a good start.”

That sounded like he intended the friendship to be a mere formality and for them to pick up where they left off. If he thought she was jumping back into a relationship, he was in for a rude awakening. “Friends, Colin. That’s all I want right now.” Again, something about the way he said it made her think he was a lot more arrogant than he thought he was.

Sky Purington is the best-selling author of nine novels and several novellas. A New Englander born and bred, Sky was raised hearing stories of folklore, myth and legend. When combined with a love for nature, romance and time-travel, elements from the stories of her youth found release in her books.

Purington loves to hear from readers and can be contacted at Sky@SkyPurington.com

Interested in keeping up with Sky's latest news and releases?

You can find the rest of Sky's tour stops HERE visit each one and enter the Rafflecopter. Remember the more times you enter the more chance you have of winning!
Posted by Hywela Lyn at 09:00:00 15 comments