To Hades with her demented half brother!

Hi fellow  Snippeteers and readers.  Welcome to  my Weekend Warriors post. I'm continuing this week with another snippet from my fantasy novella, Dancing With Fate. Thank you to everyone who's been following my snippets so far. Don't forget to visit the other authors at the link above and also below this post, there's something for all tastes.

Terpsichore, muse of dance, was given a new mission by Apollo, to restore joy and the love of dancing to the Celts of 5th Century Wales. Now she has completed her task and looks forward to returning  to

(As usual, some creative editing of punctuation and slight variation from published version to comply with 10 sentence rule) 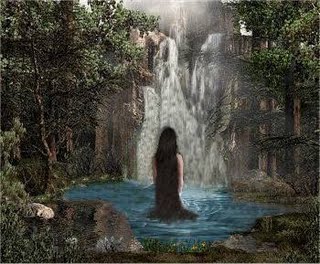 He lurched unsteadily to his feet, causing one of his Maenads to loose her hold on him, and fall over, giggling. He grabbed her arm and moments later they all disappeared like mist in the heat of a summer's day.

To Hades with her demented half-brother. The more she thought about it, the more the allure of the water drew her to it, she should never have taken that wine—not even a sip, who knew what enchantment he'd put in it?

She shrugged,what was she thinking, she  was her own goddess, wasn't she? If she wanted to bathe, she would, she certainly didn't need any charmed wine to make her decisions for her.

In an instant, her Celtic clothing melted away, she  laid her lyre against a friendly tree trunk and ran beneath the curtain of water cascading over the cliff face. She stood, waist deep in the shallows of the pool and let the water rush over her. The cold crystal clear liquid invigorated her, she felt the life force of the spring flow around and through her, the molecules that composed it, the tiny life forms unseen. This was her element and she rejoiced in it. 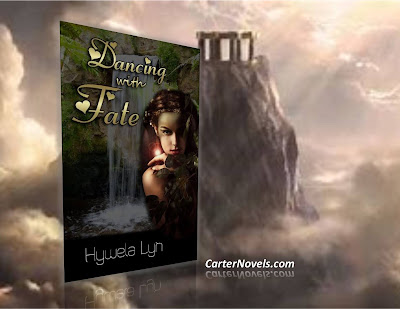 DANCING WITH FATE
When Terpsichore, the Muse of Dance, is assigned to revisit the land of Wales, her task seems simple enough. She is unaware there is a hidden agenda. Before she can return to Olympus her path crosses that of the mysterious Myrddin, and her heart is lost. But Myrddin is promised to another. His mind is set on the dangerous task that lies before him, and the woman he has sworn to save. Nevertheless, he cannot deny the growing attraction between him and the beautiful stranger he meets along the way.


Terpsichore and Myrddin face a deadly force that threatens to part them forever. Is she destined to lose the only man she has ever truly loved? Is there nothing she can do to save him? Finally, when all seems lost, in desperation she finds herself DANCING WITH FATE.

For insider news and subscriber-only info, subscribe to my occasional Newsletter. I promise not to spam and your in-box will only see an email from me every 3 or 4 months or so - unless of course I have something really Newsworthy to share! I also promise that I never have and never willl share your information or email address with anyone or any organisation.

You don't have to be in the U.K. to be in for a chance to win one of the following great prizes. First prize is £150.00 or equivalent Amazon Gift Card or iTunes card!