Welcome to Weekend Writing Warrior and 8 Sentence Sunday, the weekly hops for everyone who loves to read and write! This is a new venture for me but such a great idea -

Writers share an 8 to 10 sentence snippet on Sunday each week. Be sure to visit the other writers - they're listed Below:
Weekend Writing Warriors for Eight Sentence Sunday 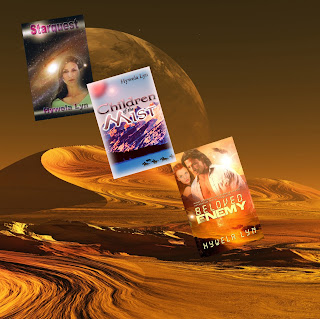 My series 'The Destiny Trilogy' started with one character - Kerry Marchant. Each book is a complete story but features some of the same characters. The series began with 'Starquest' and the third in the trilogy is 'Beloved Enemy (currently nominated for a RONE Award😊)  Although Kerry is not the main character Starquest, he is my favourite. He doesn't feature in the second book but stars in the third one! I thought it would be nice to introduce him to folk who may not have read the books, so here are ten sentences from Starquest.

(Jess, the main character has just been rescued from her stricken starship by the Destiny)

"When we received your distress signal, we ran a computer analysis. The conclusions were obvious. The only option was for you to abandon her (the ship) before her drive reached critical.”

The stern-faced man turned to look at her now. His blue eyes, cool as gunmetal, fixed on her until she felt herself blush under his relentless scrutiny. He smiled slowly, as if unaccustomed to such an action. He was, in fact, very attractive when he smiled. “Welcome aboard.”

The commander nodded in his direction. “Let me introduce Kerry Marchant, second-in-command.”

Although Jess still could not help feeling a little suspicious, she managed to smile back at him with a degree of confidence she did not feel.

If you haven't voted yet, MAY 7th
IS THE LAST DAY TO VOTE!
Only a select few will go forward to the next round so votes would be so much
appreciated! 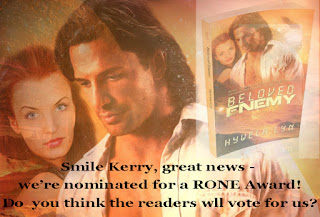 VOTE HERE - voting for this category ends May 7th! (You'll have to sign in or register to vote. (It's free and you're not committing yourself to anything.)

Thank you so much, your support means more to me than I can say.

My Page at the  Wild Rose Press -http://catalog.thewildrosepress.com/138_hywela-lyn

For insider news and subscriber-only info, subscribe to my occasional Newsletter. I promise not to spam and your in-box will only see an email from me every 3 or 4 months or so - unless of course I have something really Newsworthy to share! http://madmimi.com/signups/196357/join
Posted by Hywela Lyn at 23:30:00 28 comments

The Spoils of Allsveil by S.N. McKibben

Welcome to S N McKibben and her new release. I have to say I immediately warm to a fellow author who not only writes fantasy romance, but has a GS and a 19hh Shire! (That's 76 inches to between the shoulder blades for the uninitiated) Speaking as a dog and horse lover, and someone who can barely see over any horse taller than 15hh I'm somewhat in awe!


The Spoils of Allsveil
by S.N. McKibben
Genre: Fantasy, Romance

Murder. Marriage. Forgiveness. The kingdom of Allsveil is the chessboard, and the royals are the pieces.
Two noble families meet in a whirlwind of battle, conquest, hate, and passion.
When a neighboring army conquers her home, Princess Alexia is forced to marry her father’s murderer, Darrin, the new king's young prince. While Alexia grapples with revenge and flirtation, finding her own strength in the process, the new king, Goththor, seeks forgiveness from his queen and from himself. Two generations learn that the game of chess is nothing compared to the game of love and forgiveness...
Play chess with a princess...get your copy today!
Goodreads * Amazon

Slave to a 100 lbs. GSD (German Shepard) and a computer she calls "Dave", you'll often see her riding a 19 hand Shire nicknamed "Gunny" to the local coffee shop near the Santa Monica mountains.
Stephanie reads for the love of words, and writes fiction about Dark Hearts and Heroes revolving around social taboos. When ever asked, she'll reply her whole life can be seen through a comic strip ~ sometimes twisted, sometimes funny but always beautiful and its title is adventure. Come play!
Website * Facebook * Twitter * Goodreads * Amazon
Google+ * Pinterest * RSS Feed * Tumblr * Youtube

For insider news and subscriber-only info, subscribe to my occasional Newsletter. I promise not to spam and your in-box will only see an email from me every 3 or 4 months or so - unless of course I have something really Newsworthy to share! http://madmimi.com/signups/196357/join Every new subscriber will get a FREEdownload of my fantasy novella 'Dancing With Fate' (If this doesn't arrive within two days just email me at hywelalyn@btinternet.com)
Posted by Hywela Lyn at 12:02:00 0 comments 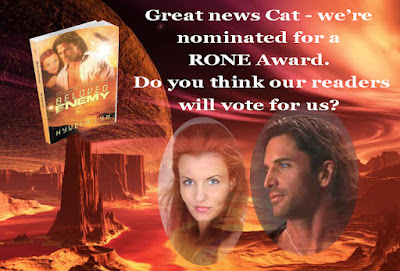 Week Three of the RONE Nominations has arrived and I’m thrilled to befortunate to enough to have a nomination this week. This is so exciting.

InD’tale Magazine's prestigious RONE Awards celebrates the best of the best books reviewed by InD’tale reviewers throughout the previous year.

If you’ve  read Beloved Enemy (or even if you haven't) and would like to cast your vote this week, you'll need to sign in at the link below (you must sign in to vote, but the two-step process is easy and your information will not be used for any other purpose You're not committing yourself to anything other than the right to vote)
Here is the link: http://www.indtale.com/2017-rone-awards-week-three

Thank you in advance to anyone who reads this post and considers voting for my book Your support means more to me than I can say!

Thanks also to Karen Michelle Nutt for featuring us at her blog today:
http://kmnbooks.blogspot.com/2017/05/rone-award-beloved-enemy-by-hywela-lyn.html

BELOVED ENEMY has garnered some great five and four star reviews and I just had a lovely four and a half star review on amazon, by Kam  https://www.superkambrook.com/ "The best science fiction tv shows are the ones that have you eagerly anticipating the following week's episode or have you zooming through the commercials because wading through 2.5 minutes of ads feels like eternity... pure torture. When a show is that good, you wish for a few more minutes. When a scifi/fantasy book is equally grand, you crave several more pages.When I was nearing the end of Beloved Enemy, I kept hoping 20-30 pages would magically appear -- much like things in the book. No such luck though. However, despite my wish not being granted, I was thoroughly satisfied with everything I did read.Each chapter in Beloved Enemy contained enough scifi, mystery elements/creatures that maintained my attention from the beginning to end..."
and Kam ends up by saying "And that's all you'll get from me. To find out more.... read the damn book. No seriously, read it. It's a page-turner, for sure!"

Thank you so much Kam!

For insider news and subscriber-only info, subscribe to my occasional Newsletter. I promise not to spam and your in-box will only see an email from me every 3 or 4 months or so - unless of course I have something really Newsworthy to share! http://madmimi.com/signups/196357/join
Posted by Hywela Lyn at 23:30:00 2 comments