Myths and legends of Wales - Dwynwen

I've decided to make Monday a day for relating legends and stories of my homeland, Wales.

Last week I posted about St David, Wales' Patron Saint. This week, I thought I'd tell you about another Saint, this time a woman, St Dwynwen. I know it's a little late, but she is actually the Welsh equivalent of St Valentine. 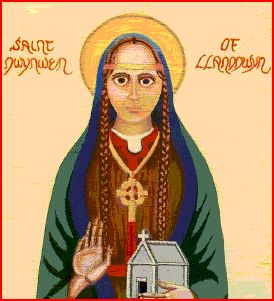 There are several legends about St Dwynwen, this is one of the most popular:

Dwynwen was the beautiful daughter of Brychan Brycheiniog. She fell in love with a prince called Maelon Dafodrill, but unfortunately her father had already arranged that she should marry someone else. Dwynwen was so upset that she could not marry Maelon that she begged God to make her forget him. After falling asleep, Dwynwen was visited by an angel, who appeared carrying a sweet potion designed to erase all memory of Maelon and turn him into a block of ice. He then gave three wishes to Dwynwen.
Her first wish was that Maelon be thawed; her second that God meet the hopes and dreams of true lovers; and third, that she should never marry.

Dwynwen became a nun, fulfilling her wish to never marry, and left for the island of Anglesey to build a Church. This is referred to as Llanddwynwen, literally meaning 'Church of Dwynwen'.

Isn't that a romantic (if rather sad) story?
Belated Happy St Dwynwen's Day! 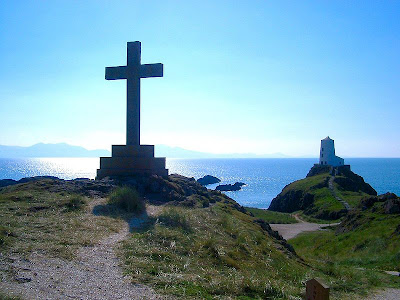 The lighthouse and cross at Llanddwynwen

(Picture courtesy of Wikipaedia)
For insider news and subscriber-only info, subscribe to my occasional Newsletter. I promise not to spam and your in-box will only see an email from me every 3 or 4 months or so - unless of course I have something really Newsworthy to share! I also promise that I never have and never will share your information or email address with anyone or any organisation.  http://madmimi.com/signups/196357/join