Hello again, and if I have any male readers - I hope you had a truly loving and happy Father's Day. 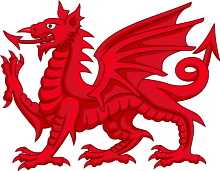 In my series on Welsh myths and legends, the last few weeks have been devoted to mythical legends. It would be very remiss of me not to mention the famous Welsh dragon - Y Graig Goch - which appears on the Welsh flag. (LOL not many countries have a dragon on their flag, do they!)
You might be surprised that it relates to the Arthurian legends. 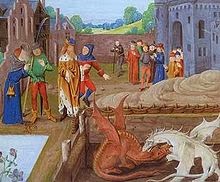 The dragons fought each other, and the eventually the red one won the battle and drove the white one away.

The boy's life was spared. He became famous as the great magician Myrddin Emrys , or Myrddin ab Morfryn (Merlin, as he is called in English), and the mountain on which he proved his mighty power was called  Dinas Emrys instead of Dinas Ffaraon.  Thereafter the red dragon became the symbol of Wales and portrayed on the Welsh flag. 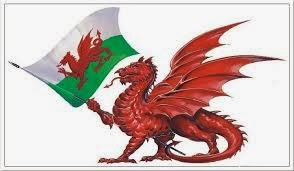