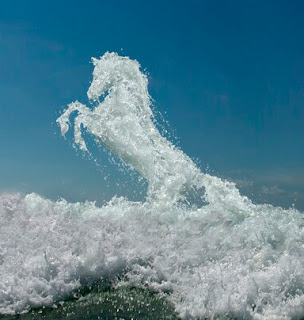 After the tale of Rhiannon, the goddess of the horse, which I told you about a few weeks ago, I thought I'd mention one of the mythical creatures of Wales, the Ceffyl Dŵr, literally translated into English this means the 'Water Horse'.
Tales of this creature, which appears as a white horse (for some reason most mythological horses seem to be white, although when I was learning to ride as a child, I was taught that there are no such things as 'white' horses, only 'light greys, or albinos, but I digress.) Depending on which region of Wales one hears the stories, the Ceffyl Dŵr was believed to shapeshift, as well as having the power of flight. For example, in North Wales, it is represented as being rather formidable with fiery eyes and a dark foreboding presence, whereas in South Wales is seen as merely mischievous. She also is known to walk on her hind legs and disappear down the well in the graveyard of St Illtyds church in Oxwich Bay, or to simply evaporate into the sea mist. Over the centuries there have been many sightings of Ceffyl Dwr mostly around St Illtyds church.
The Ceffyl Dŵr is said to inhabit mountain pools and waterfalls and although it appears solid, it can evaporate into a mist. In one legend the Ceffyl Dŵr leaps out of the water to trample and kill lone travellers. In another legend, the Ceffyl Dŵr rises from the sea and entices the unwary traveler to ride her, then takes to the  air, and evaporates, and the unfortunate rider falls to his death.
Hmm, rather glad not to have met any horses quite like that, in real life!