When Jestine Darnell is rescued from her sabotaged starship by the crew of the Destiny her only objective is to complete her mission and keep her promise to save a world from slavery. Love is the last thing on her mind. However, she has not counted on losing her heart to Kerry Marchant the ship’s second in command, who makes his distrust of her painfully obvious, despite the chemistry between them. The completion of her mission has consequences that neither of them could have foreseen.
Enter Dahll Tarron, who becomes involved in a long and dangerous quest to find the Destiny. Fates become intertwined, perils shared, culminating in the realization that sometimes love may be so close that there is a danger it will not be recognized until it is too late…
READ REVIEWS HERE
READ FIRST CHAPTER EXCERPT
GET IT HERE


CHILDREN OF THE MIST (Book 2)

Two minds united against a common foe. Two hearts afraid to show their love:
Long ago Tamarith fell in love with a man she can never have, and is convinced she will never love another. However, she cannot help but be intrigued by a handsome stranger whose psychic powers exceed even her own.
Vidarh seeks only to find his true purpose in life and to win the regard of his father, who eschews his son’s psychic abilities. Thrown together by a common threat to their planet, then torn apart by an evil greater than any they could have imagined, can Vidarh save the lovely Nifl woman who has captivated him, before it is too late?
Will Tamarith and Vidarh overcome the deadly enemy who threatens to destroy all they know and love? Will they find the happiness they both seek? Or are they fated to live their lives alone?
READ REVIEWS HERE 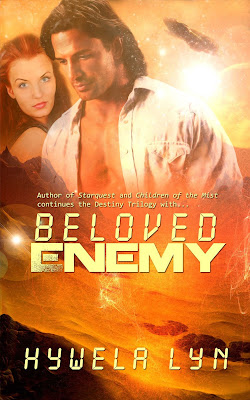 Kerry Marchant, haunted by memories, regret and self-blame, shields himself from the pain of the past by committing himself totally to the starship, Destiny, of which he is part owner. However, the beautiful, red haired woman who reminds him of his lost love, and who he suspects is working for a corrupt regime, represents a possible threat not only to the ship,  but to his heart.

“What about our ‘friends’?” He turned his head and looked in the direction of the rocks where the assailants of a few minutes before let loose the last
salvo of blaster fire.

She put the tri-dee-viewer to her eyes again and scanned the area. “There’s no sign of life over there.

They must all be dead or badly injured. They’d have shot at us again if they were still capable.”

“Unless they are waiting for us to show ourselves, so they can pick us off more easily,” Kerry said.

He made as if to stand, and in an instant, she drew her pistol.

“Like I said before, no sudden moves. Get up—slowly.”

“So you are making me a prisoner?”

“Not exactly, but I’m not stupid enough to take any risks.”

He rose to his feet, his gaze not leaving her gunhand. Several inches taller than her, broad shouldered and slim, he presented a commanding figure. His
expression froze as his gaze homed in on the insignia on her breast pocket, his eyes like chips of blue ice.

“You work for the Union.”

“I work for myself.”

“Then why are you wearing the insignia of the Global Union of Earth and Allied Planets?”

“I have a license to requisition any enemy ship trespassing in the sectors of space over which they hold dominion.”

“A licensed pirate in the pay of the Global Union,” Kerry’s eyes showed outright contempt. She almost preferred the icy coolness.

“I prefer to think of myself as a freelancer—doing a service.”

His expression did not change, although he did change tack. “You could have left me to die—or just shot me. Why didn’t you?”

“Call it a personality flaw. I don’t like abandoning someone who’s wounded even to save my own skin.

And I don’t kill in cold blood. If I have to shoot someone, I’d rather they were facing me with their eyes open.” Even if I did swear to leave their dead body for
the Union to use in their hideous experiments. Keep it casual. Don’t let him guess what’s really in your mind.

To her amazement, he smiled the most devastating smile she’d ever seen, made even more remarkable because he didn’t look as if he did it very often.


“My own philosophy as it happens.” His eyes narrowed. “It seems almost a pity we are on opposite sides.”

“Opposite sides?” How much did he guess?

“I have no love for the Alliance. That puts us on opposite sides, even if you are a pirate.”

She gave him her most withering look. “Fine. And just because I decided to save your neck, don’t get any ideas. We don’t have to like each other.” 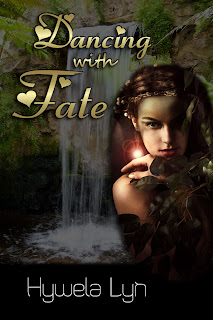 When Terpsichore, the Greek Muse of Dance, is assigned to revisit 5th Century Wales, and help the people regain their love of dancing, her task seems simple enough. She is unaware there is a hidden agenda. Before she can return to Olympus her path crosses that of the mysterious Myrddin, and her heart is lost.But Myrddin is promised to another. His mind is set on the dangerous task that lies before him, and the woman he has sworn to save. Nevertheless, he cannot deny the growing attraction between him and the beautiful stranger he meets along the way. Terpsichore and Myrddin face a deadly force that threatens to part them forever. She seems destined to lose the only man she has ever truly loved. Finally, when all seems lost, in desperation she finds herself DANCING WITH FATE.