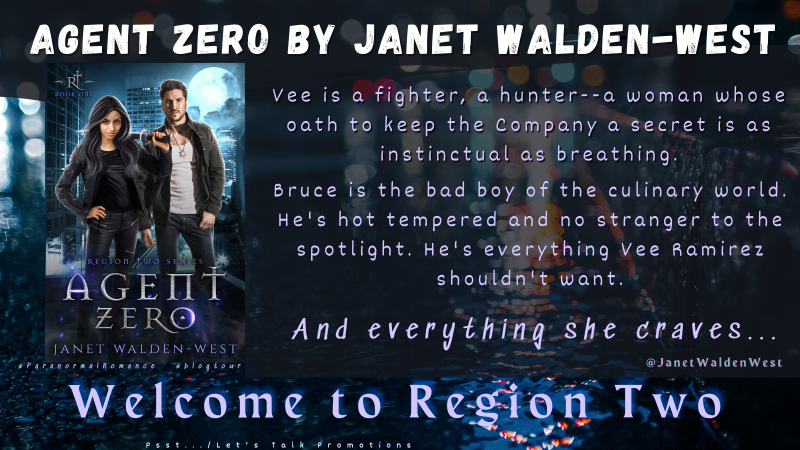 Dear readers - I am so sorry this post is late going up - I've had a few internet problems but I hope you enjoy this taste of Janet Walden-West's great new fantasy romance - AGENT ZERO - and don't forget to enter the refflecopter draw to win an Amazon voucher!

He owns the spotlight, she lives in the shadows.

My only purpose? Keep lethal cryptids in check, and our Company existence secret. 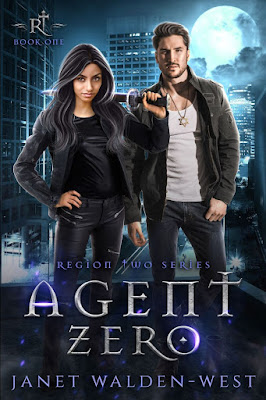 Sometimes a girl needs a night of karaoke and tequila though. Instead, after a vicious new cryptid
species crashes the party, I end up saving and carting home a way arrogant, way hot chef. With Bruce Kantor now a temporary roommate it seems like the perfect time to indulge my forbidden civilian fascination—especially the friends-with-benefits part. But the feelings he ignites threaten my oath and mission.

Damn right I’m the bad boy of the culinary world.

I live for the limelight, and the legions of #BruceTheBastard fans love my temper as much as my food. After stomping out of one high-profile gig, all I’m looking for are directions to my next. What I get is a giant Komodo Dragon-wannabe, and Vee Ramirez, the most infuriatingly irresistible woman to ever hit my radar.

Even if we survive the relentless monster on my trail, our future is toast unless I can convince Vee there’s more to life than the Company.

Add it on Goodreads: https://tinyurl.com/rwpszc23

Both singers were into their performance. The one brutalizing vocals though—she was in another league. Brown arms lifted high, watch-me pink skirt swirling around toned legs, she moved like the music was part of her. Like she didn’t give a shit about anyone’s opinion.

His phone buzzed again and he ignored it. The same as he ignored the woman who sidled close, brushing against his side. He frowned, scrubbing a hand over his arm to wipe away the itch from whatever faux-snakeskin fabric her dress was made of. He sidestepped to keep his singer in view. Hopefully, whoever it was got the message that he wasn’t interested as the pair launched straight into another song, murdering Lizzo with the same glee.

The lead singer flipped her hair in synch with the lyrics, laughing and swiping strands out of her eyes, oblivious to how her amber-dark waves fell, as long as they didn’t interfere with her performance.

His phone came to life again. The dumbass owner wouldn’t dare text after having calls ignored, but Bruce’s family certainly would. He pulled the phone out, confirming his guess. He swore as he scrolled, one missed call from the guy, two missed calls from his sister, who had stooped to having his niece text, complete with a five-year-old’s spelling errors and a photo with cartoon puppy ears and nose over hers. Like the little shit needed any help being adorable.

If he didn’t call, he’d probably O.D. from whatever next-level cuteness the kid came up with. He dropped a twenty on the bar and anchored it with his sweaty beer bottle. Giving the stage a last glance, he forgot what he was doing for an instant. The singer pivoted like she felt his gaze. Her eyes locked with his, humor and intensity shining.

It felt as if she was reaching out and physically touching him. Touching something under his skin, real and alive. Like with no effort, he could reach back, completing the weird connection between them.

His phoned danced in his hand, reminding him of his obligations. More bodies had packed the front of the bar. He aimed for the closest quiet spot, usually behind a restaurant or bar where employees ducked out to smoke or bitch about their boss. He spotted the exit sign and let himself out.

The door opened onto a side street and a strip of businesses. A boot shop, the real deal instead of the trendy stuff tourists gobbled up, took up most of the space. The rest was divided between a tiny jewelry store and a florist, their signs in Spanish. All were closed for the evening.

He hit redial, pacing back and forth through the alternating strips of light and shadow.

“It took you forever to call me,” greeted him, his niece as impatient as ever.

He couldn’t help grinning at the aggrieved, high-pitched complaint. “Since when is, let me check…oh, yeah. Since when is four minutes forever?”

“You’re old and don’t remember but minutes are looong.”

Janet Walden-West lives in the Southeast with a pack of show dogs, a couple of kids, and a husband who didn’t read the fine print. A member of the East Tennessee Creative Writers Alliance, she is also a 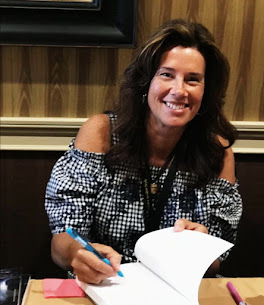 ​She is represented by Eva Scalzo of Speilburg Literary Agency.