Weekend Writing Warriors Snippet Sunday "...someone is following us!" 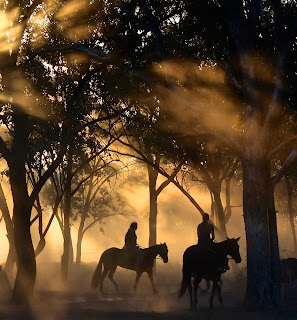 Continuing snippets from my fantasy novel 'The Matchmaker's Mare which takes place in Wales. The  story is told from three p.o.vs. and two time-lines. Today's excerpt is again from Rhiannon's p.o.v. and takes place in the distant past, a few chapters along from the last one. She and Sion are fleeing from her father and an arranged marriage.


For two more days and two nights they rode toward the next range of mountains, only stopping to rest and feed the horses, and to let them drink when they found a river or stream. The wind blew strongly from the north, bringing with it flurries of snow.

They stopped at friendly farmsteads along the way, to purchase a few loaves of bread and some fruit which they ate while riding. On the fourth day since she’d fled her home, the snow started to fall in earnest, soon covering the ground in thick drifts, and riding fast became dangerous, forcing them to slow down to a walk.

After several hours Seren whickered softly. Rhiannon turned and looked back, peering through the white mist of snow. A rider appeared like a wraith in the distance. “Sion, there’s someone following us, it must be either my father or Gwynfor Pryce.…”


I now have some audio codes for each of the three books in the Destiny Trilogy. If you would like one, or all three, just let me know with your email address at Lyn@hywelalyn.co.uk and I'll send you the ones you request, (Each book has its own code). If could manage to post a short review after you've listened, that would be greatly appreciated. 😍