Hi folks, hope you're keeping safe and not going too crazy with social distancing!
(You might want to keep your distance from these ghosts though!)


THE GHOST OF LLANDEGLA
A small river runs close to the secluded village of Llandegla, and in this mountain stream under a huge stone lies a wicked Ghost. This is how he came to be there:

It  not is not known why Ffrith farm was troubled by a ghost, but when the servants were busily engaged in cheese making the Spirit would suddenly throw earth or sand into the milk, and thus spoil the curds. The dairy was also visited by the ghost, and there he played havoc with the milk and dishes. He sent the pans, one after the other, around the room, and dashed them to pieces. The terrible doings of the ghost was a topic of general conversation in those parts.
The farmer offered a reward of five pounds to anyone who would lay the Spirit. One Sunday afternoon,  an aged priest visited the farm yard, and in the presence of a crowd of spectators exorcised the ghost, but without effect.

The farmer then sent for Griffiths, an Independent minister at Llanarmon, who enticed the ghost to the barn. The ghost then changed its appearance to the form of a lion, but  could not touch Griffiths, because he stood in the centre of a circle, over which the lion could not pass. Griffiths tricked the ghost  into appearing in a less formidable shape, and it changed into a mastiff, but Griffiths demanded that it change to something smaller.

At last, the ghost appeared as a fly, which was captured by Griffiths and secured in his tobacco box.  This box he buried under a large stone in the river, just below the bridge, near the Llandegla Mills, and there the Spirit is forced to remain until a certain tree, which grows by the bridge, reaches the height of the parapet. When this takes place, the Spirit shall have power to regain his liberty.  To prevent this tree from growing, the school children, even to this day, nip the upper branches to limit its upward growth.

THE GHOSTLY GIANT OF PONT-Y-GLYN 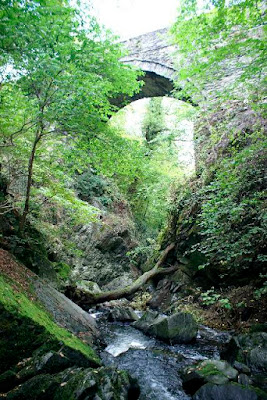 There is a picturesque glen between Corwen and Cerrig-y-Drudion, down which rushes a mountain stream, and over this stream is a bridge, called Pont-y-Glyn.  On the left hand side, a few yards from the bridge, on the Corwen side, is a yawning chasm, through which the river bounds.  Here people who have travelled by night affirm that they have seen ghosts—the ghosts of those who have been murdered in this secluded glen. A man who was a servant at Garth Meilio, said that one night, when he was returning home late from Corwen, he saw before him, seated on a heap of stones, a female dressed in Welsh costume.  He wished her good night, but she returned him no answer.  She, got up and grew to gigantic proportions as she continued down the road which she filled, so great were her increased dimensions. Other Spirits are said to have made their homes in the hills not far from Pont-y-Glyn.

and finally...
FREE AUDIOBOOKS
If you're at a loose end in these strange and rather scary times, there are so many great books out there to be read, try a new author. If you'd like to listen to a book rather than read it, You can get my Destiny Trilogy for FREE. 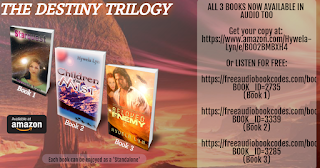