Dyfed is a county in Wales that used to be called Cardiganshire or Ceredigion and has now reverted back to Ceredigion again.  (The British government does love to change boundaries and rename counties, but lets not go down that road.) An old legend about Dyfed, goes as follows:

A magical mist descended  Dyfed, and all animals and people perished, apart from Pryderi, Manawydan, Pryderi's wife, Cigfa, and Rhiannon, Manawydan's new wife who was also Pryderi's mother.  They supported themselves by hunting at first, then moved to England where they made a living making saddles shoes and leather shields, the quality of which was so high that the local craftsmen were unable to complete, and threatened to kill them out of jealousy.  Eventually they fled back to Dyfed and became hunters again.

While  hunting a white boar  Pryderi and Manawydan  came to  a mysterious castle. Pryderi, against Manawydan's advice, ventured inside and did not return. Rhiannon went to find him and eventually came upon Pryderi clinging to a beautiful golden bowl, transfixed and unable to speak. When she tried to help him get free,  the same fate overcame her and another mist descended and the castle disappeared, taking them with it. Manawydan and Cigfa returned to England  but once again were driven away and forced to return to Dyfed and take up farming to grow food for themselves. 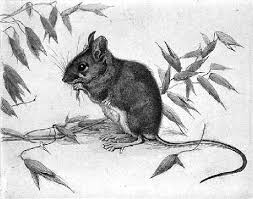 They sowed three fields of wheat but the each crop in the first two fields disappeared before it could be harvested. Manawydan kept watch over the third field and realised that mice were responsible for the disappearance of the grain. He caught one and prepared a mouse sized gallows, intending to hang it the next day as punishment.

A scholar, a priest and a bishop in turn offered him gifts if he would spare the mouse but he refused. The bishop said he was willing to pay any price he wanted in  return for the mouse's life and at length Manawydan relented and demanded  the release of Pryderi and Rhiannon and the lifting of the curse over Dyfed in return for releasing the mouse. The bishop agreed,  because the mouse was, in fact, his wife. He revealed that his name was Llwyd, son of Cil Coed, the other mice were actually lords and ladies of the court and that he caused the enchantment on Dyfed in revenge for the insult against his friend Gwawl, whom Pwyll, Pryderi's father had humiliated,by tricking him out of a marriage with  Rhiannon. Manawydan handed over the mouse and as agreed, Rhiannon and Pryderi were released from their enchantment and returned, and  Dyfed was restored.
Posted by Hywela Lyn at 12:56:00 2 comments