Welcome to Weekend Writing Warrior and 8 Sentence Sunday, the weekly hop for everyone who loves to read and write!
First of all, I'd like to wish everyone a very Happy,Peaceful and productive New Year, and I hope you all had a good Christmas with family and friends.
Apologies for being away so long. It has been a fairly hectic few weeks with a visit to Wales to take the family's Christmas gifts, and visit family members,among other things, including getting snowed in. I also had a traumatic few days when I had to have one of my two beloved horses put to sleep, when his battle with arthritis became too much. I've not been on-line all very much since before Christmas so I hope you'll excuse my absence. I look forward to being part of this great group again.


Writers share an 8 to 10 sentence snippet on Sunday each week. Be sure to visit the other writers - they're listed below:

Here's the second snippet from the third book in the Destiny Trilogy. Thanks so much to everyone who has been following this series, and stayed with me xx

You can read the previous snippet of  Beloved Enemy HERE
(The story so far - Cat Kincaid has crashlanded on an unknown and seemingly hostile planet, apparently in the middle of a gun battle in the not-too-far distance. Cat, being Cat has to investigate...


She strained to see how many combatants were involved. The air shimmered and danced in coruscating hues of blue and green, heavy with blaster smoke. Putting her tri-dee-viewer to her eyes, she adjusted the range. Three figures crouched behind a rock to one side of her in the shallow valley below. As far as she could
make out, they were human. On the other side of the little clearing where the

vegetation took over again, a much larger group, apparently also humanoid, kept up a relentless barrage of blaster fire. From this viewpoint, it looked as if they outnumbered the three several times over.

She raised her weapon undecided as to whether she should get involved or not. This was not her fight, especially since she didn’t even know who they were.She drew in her breath, it would be cowardly just to leave. 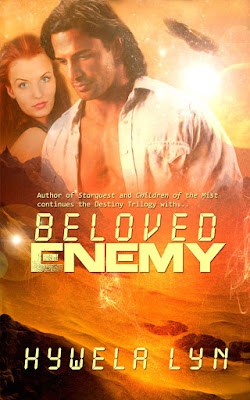 Purchase all three books (or just one, they stand alone, while sharing some of the same characters)