CHANDELIER is the genre-bending SF/fantasy-romance novel follow up of Michael Leon’s 2019 fantasy-romance book, PHANTOMS. A century has passed since the fabled Phantom ruled the Garnier Opera House. Technology has advanced, and AI has evolved beyond human knowledge. They reside in a virtual Earth, free from the ravages of an environmentally damaged Earth where humans and post-humans live under AI’s qualified governance. CHANDELIER follows one AI sentient’s journey, Benny, whose loyalty for a famous opera singer, Madame D’Arenberg, sets him on a dangerous course, entangling him in The Phantom of the Opera’s deadly web. 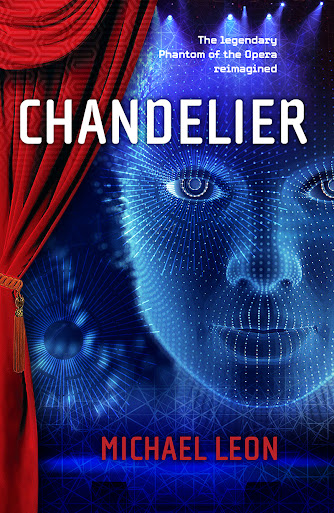 The twilight between tired revellers and early morning risers had become Erik’s refuge, a place where the pains of past and present could coalesce in his ritual of the macabre. He’d dreamt of his tormentors again, beasts controlled by masters who understood their canine's savagery as intimately as a mother
knew her child and recurring nightly, taunting his mind.


Chilly breezes flowed down from the Lepontine Alps, carving patterns across Lake Como, so he drew his coat closer, protecting all but his face, but he wouldn't feel an arctic breeze there. He touched his pale cheeks, not to warm them for they were permanently cold, an immovable party mask. Instead, he felt the rough texture of the implanted skin, grafted to his face. Habitually, he reached into his coat pocket for a medicated ointment that soothed and camouflaged his face in equal measure.

A single boat predictably made its way toward the Bellagio port, the first for the day, in wait for the steady procession of commuters and tourists that would navigate the Lombardy region, Italy's foothills to the Swiss alps. The light from the slow-moving boat cast a darker than usual spotlight on the famous U-shaped lake, lit by its twin light, a crescent moon. It took Erik back to a dark past when he ruled the Garnier from the recesses of its famous lake chamber. His rule was cut short through carelessness, a mistake he would not repeat. He’d return to the jewel of the opera crown and rule that grand world again, but this time he'd lead it from the stage rather than Garnier’s hidden lake.

Were similar dark secrets contained in the black depths of Lake Como? The thought made him grimace, drawing pain. He held his mouth and cheeks, soothing the scar lines camouflaged beneath a thick beard. The scars, like his name, Erik, were all that remained of his past life, contingencies needed to protect him from those who’d seek to destroy him.

Michael Leon is an explorer, writer and author of the new novel, Sentient. Professionally trained in international trade, Michael has spent the last decade reading and writing SFF novels about new worlds 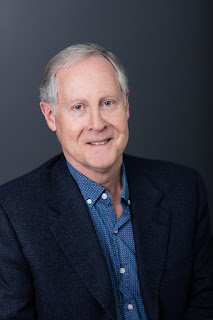 to be explored in the future. His latest work, Sentient, imagines Earth in the year 2120. His next novel, Chandelier, will be released in 2022. Michael has travelled extensively around Europe, walking the paths of his characters, from the famous European opera houses in Phantoms to the mountain tops of Switzerland in Emissary.

One randomly chosen winner via rafflecopter will win a $50 Amazon/BN.com gift card.

Just came across this - as a horse lover, I think it's beautiful and wanted to share!