I'm continuing snippets from the draft of my current 'work in progress' a fantasy novel 'The Matchmaker's Mare' which takes place in Wales. The  story is told from three p.o.vs. and two time-lines. Today's excerpt is in Glyn's P.O.V.  and is our first glimpse of him.. and he has a bit of a problem. (Adjusted from original to conform with ten sentence rule.)

(This is only a rough draft to give the gist of the novel, and is subject to change and edits!)

Glyn  knew was something odd about the chestnut pony when it appeared in one of his paddocks from nowhere. At first he thought she was one of the semi-wild ponies that roamed the mountains. They were all owned by someone and usually freeze branded or micro-chipped, but this one had no owner’s mark on her and his scanner revealed no micro-chip. 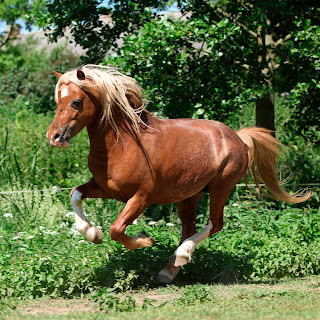 He contacted the Police, the Welsh Pony and Cob Society, the local pony club, riding club, and everyone in his E-mail lists, and posted her picture on Facebook and Instagram but no-one reported losing a chestnut cob type pony mare.


“She’s pretty little thing, with that distinctive star on her face, but what am I going to do with her?” he said to Evan Thomas— friend, groom and general handyman, who broke in all the young horses for him. “I can’t sell her or breed from her since she doesn’t legally belong to me.”

“Look Glyn, why don’t you just let me put a saddle on her an’ let’s see what she goes like?”


Glyn hesitate - at six foot, he was too tall himself for a mare her size, and he knew of no-one, other than Evan,who was light enough and competent enough to handle her if she proved difficult.

“I’m not sure about that, Evan, there’s no telling if she’s broken to ride, although she’s let me halter her and lead her around, but she spooks at her own shadow and seems a bit temperamental.”

He glanced over at the mare standing in a corner of the paddock. She stamped her foot and shook her head so her long mane flowed around her like a halo, almost as if she knew they were talking about her.

For Info: I still have a few audio codes for each of the three books in the Destiny Trilogy. If you would like one, or all three, just let me know with your email address at Lyn@hywelalyn.co.uk and I'll send you the ones you request, (Each book has its own code). If could manage to post a short review after you've listened, that would be greatly appreciated. 😍