Hi everyone - hope you're keeping safe. If you're in enforced social distancing and feeling at a bit of a loss, how about a couple of old Welsh ghost stories to take your mind off the current weird and rather scary situation.

THE GHOST OF TY FELIN 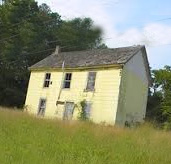 An exciseman, overtaken by night, went to a house called Ty Felin, (Yellow House) in the parish of Llanynys, and asked for lodgings.  Unfortunately the house was a very small one, containing only
two bedrooms, and one of these was haunted; consequently no one dared sleep in it.  After a while, however, the stranger induced the master to allow him to sleep in this haunted room. He had not been there long before a ghost entered the room in the shape of a travelling Jew and walked around the room.  The exciseman tried to catch him and gave chase, but he lost sight of the Jew in the yard.  He had scarcely entered the room, a second time, when he again saw the ghost.  He chased him once more and lost sight of him in the same place.  The third time he followed the ghost, he made a mark on the yard where the ghost vanished and went to rest, and was not disturbed again.

The next day, the exciseman got up early and went away, but, before long, he returned to Ty Felin accompanied by a policeman, whom he requested to dig in the place where his mark was.  This was done and underneath a superficial covering, a deep well was discovered, and in it a corpse.

Under interrogation, the tenant of the house, confessed that a travelling Jew, selling jewelery and such items, once lodged with him, and that he had murdered him and cast his body in the well.


BLACK DOGS AND ARTHUR'S SEAT
In Welsh mythology and folklore, Cŵn Annwn" hounds of Annwn") were the spectral hounds of Annwn, the otherworld of Welsh myth. They were associated with a form of the Wild Hunt, presided over by Gwynn ap Nudd. Christians came to dub these mythical creatures as "The Hounds of Hell" or
"Dogs of Hell" and theorised they were therefore owned by Satan. However, the Annwn of medieval Welsh tradition is an otherworldly paradise and not a hell, or abode of dead souls.

They were associated with migrating geese, supposedly because their honking in the night is reminiscent of barking dogs

The Cŵn Annwn also came to be regarded as the escorts of souls on their journey to the Otherworld.
The hounds are sometimes accompanied by a fearsome hag called Mallt-y-Nos, "Matilda of the Night". An alternative name in Welsh folklore is Cŵn Mamau ("Hounds of the Mothers").

Hunting grounds for the Cŵn Annwn are said to include the mountain of  Cadair Idris, where it is believed "the howling of these huge dogs foretold death to anyone who heard them.The locals claim that the mountain is haunted, and that anyone who spends the night on top of Cadair Idris will wake up either a madman or a poet. Different legends surround the mountain and one of the earliest claims that the giant Idris lived there. Three large stones rest at the foot of the mountain, and legend says that Idris got angry once and kicked them, sending them rolling down the mountainside.

Other Welsh legends state, however, that Arthur made his kingdom there, hence the name Cadair Idris: or the Seat of Idris.

Join me next week for some more old Welsh ghost stories.