I'm back! I missed you all, last weekend, but this week I'm continuing snippets from my fantasy novel 'The Matchmaker's Mare which takes place in Wales. The  story is told from three p.o.vs. and two time-lines. Today's excerpt is again from Rhiannon's p.o.v. and takes place in the distant past. She and Sion are fleeing from her father and an arranged marriage with the evil Gwynfor Pryce who is pursuing them.


(This is the last snippet I'll be posting from Rhiannon's P.O.V.) Next time It will be characters from the present time. I probably won't be posting next week as I will  probably be away for a few days and won't have internet but I'll read snippets when I get back)


“Make for the woods,” Sion yelled, turning his horse in the direction of a thick forest, that covered the lower slopes of the steep mountain range known as Mynyddoedd y Ddraig—The Dragon Mountains. “Perhaps we can lose him in the trees.”

They leaned low over their horses’ necks, urging them on as fast as they dared. Both the horses were swift and sure-footed, but the deep snow made it impossible for them to increase the distance between them and their pursuer. 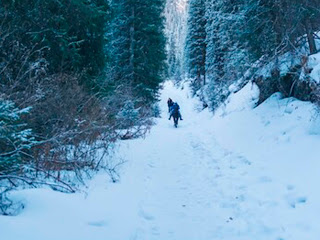 They had to slow their mounts again in order to wend their way through the trees, scarcely able to see through the snow which fell thickly around them, but Gwynfor Pryce  cast a spell over the forest. The trees the lovers thought would hide them turned traitor, stretching out their branches to twine around the horses’ legs. They threw themselves from their saddles, and Sion hacked at the branches with his dagger, while Rhiannon tore at them with ice-cold fingers.

At last they were free, and turning away from the treacherous forest, they remounted and ploughed through the snow along the narrow track up the precipitous mountainside. However, the delay had cost them precious minutes, and soon their pursuer was upon them…


For Info: I now have some audio codes for each of the three books in the Destiny Trilogy. If you would like one, or all three, just let me know with your email address at Lyn@hywelalyn.co.uk and I'll send you the ones you request, (Each book has its own code). If could manage to post a short review after you've listened, that would be greatly appreciated. 😍

For insider news and subscriber-only info, subscribe to my occasional Newsletter. I promise not to spam and your in-box will only see an email from me every 3 or 4 months or so - unless of course I have something really Newsworthy to share! I also promise that I never have and never will share your information or email address with anyone or any organisation.  http://madmimi.com/signups/196357/join
Posted by Hywela Lyn at 00:43:00 21 comments