Plight Of The Highlander by SkyPurrington - Blog Tour and Giveaway

I've known Sky purington as an on-line friend for nearly seven years (wow!) and it's a great thrill to be able to feature her on the flightdeck with the latest in her wondeful MacLomain series
PLIGHT OF THE HIGHLANDER
The MacLomain Series
Next Generation
Book 5
Genre:  Time Travel Fantasy Romance 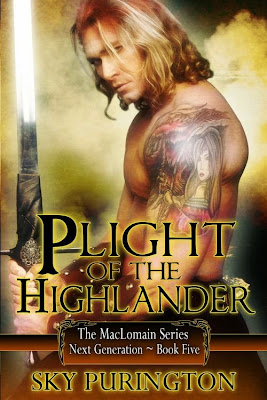 With the dragon blood of her Viking ancestors coursing through her veins, Torra MacLomain has long tried to keep her Scottish clan safe. But a ruthless enemy has been watching...waiting. As Keir Hamilton launches his plan to possess her, many secrets come to light including her passion for a certain highlander.

When Colin MacLeod's undying love for Torra is discovered, he's given an ultimatum. Watch his lass die a brutal death or defect from his clan to lead the Hamilton armies. Four winters later and in charge of Keir's warriors, Colin battles in an ongoing war against the MacLomains. Yet now the worst has come to pass. His ill-found chieftain has finally trapped Torra.

In a castle siege unlike any other and because of time travel, the modern day Brouns and medieval MacLomains join together in a final stand-off against their merciless enemy. Battles rage. Mysteries are revealed. Freedom is found. But most importantly, a love long repressed at last rises up determined to conquer all in Plight of the Highlander.

Colin reeled her in until she stood between his legs. He braced his hands on her hips, eyes penetrating as he said, “You keep secrets…even from me.”

“Especially from you,” she whispered, voice failing when thickened with emotion. “‘Tis safer that way.”

Colin’s face remained impassive and he clasped her hips a fraction tighter. “There is nothing safe about me not knowing what you intend. To keep me without knowledge only makes it more difficult for me to protect you.”

Torra gently touched his cheek, thoughts once more on the eve before as she murmured, “There will be times that you cannae protect me, that I must fight battles on my own.” Unable to stop herself, she ran the pad of her thumb softly over his lower lip. “‘Tis all part of the fear that you help me face, aye?”

Colin closed his eyes briefly before they narrowed on her once more and he shook his head sharply. “I cannae force words from your lips but know this, ‘twill be unforgivable if harm befalls you and I could not help because you shut me out.”

Torra offered a small nod. What else could she do? Pain and frustration were clear enough in his eyes. That caused her grief as she thought about what he had done for her the previous night. What he had done to her. Not only his kiss but his touch had kindled a wide swath of sensations that swept her away in a rising tide of soul-deep need. She never imagined a simple kiss could feel so good.
Now sampled, she wanted more. Far more. But it wasn’t just his lips she craved. Now she knew there was an indescribable pleasure to be found in his arms. Torra instinctually pulled away. But Colin didn’t let her get too far. His eyes flared and whipped down her body then back to her flushed face.
When he stood she put up a hand and shook her head. On a heavy swallow she said, “Nay, ‘tis too soon. I need time to gain confidence.”

Her words sounded like an excuse even to her own ears. Mayhap for all she thought this morn that she had come so far, she had not at all. Torra watched Colin internally fight his assertive nature. She knew full well he was tempted to pull her into his arms. Instead, he inhaled deeply and raked a hand through his hair.

“Confidence will only be gained through repetition. ‘Tis what I tell my warriors,” he muttered under his breath and stalked into the adjoining chamber.

“I am not one of your warriors,” she reminded, following, trying not to get aggravated.

“Aye, but you are.” Colin’s regard swung her way as he poured two mugs of mead. “You are mine and you are a warrior.” He handed her a mug, eyes the hardest she’d ever seen them. “If you will not share your secrets then I will focus ever harder on those aspects of this war in which I can help.”
She knew precisely what aspects those were. Torra set aside the mug and crossed her arms over her chest. “So you think to train me by seducing me?”

“Aye, lass.” His lips quirked but his eyes remained mirthless. “Your greatest strength lies in the relationship you have with the dragon. To become the best warrior you can you must have full control over your other half.”

It didn’t matter how much sense he made, his words irked her. But despite her rising temper, Torra was surprised to realize that not only his words but the stern way he looked at her ignited…desire? This time his lips didn’t quirk but curled up ever so slowly, well aware of both her mental and physical reaction. 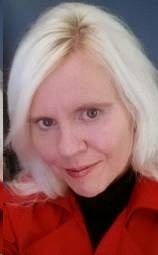 About the Author:
Sky Purington is the best-selling author of thirteen novels and several novellas. A New Englander born and bred, Sky was raised hearing stories of folklore, myth and legend. When combined with a love for nature, romance and time-travel, elements from the stories of her youth found release in her books.

Purington loves to hear from readers and can be contacted at Sky@SkyPurington.com