Weekend Writing Warriors #SundaySnippet - 'Dancing With Fate' - ".."Do you sense danger—has someone followed us?"

Last week: Terpsichore, muse of dance, has been given a new mission by Apollo, to restore joy and the love of dancing to the Celts of 5th Century Wales. This week we skip ahead to another character, Myrddyn ab Morfryn.
SNIPPET:  (Some creative punctuation from published version, to comply with 10  sentence rule.)

Seven weeks later
Myrddin glanced around; unable to shake off the feeling he was not alone. Far above the outstretched arms of the nearby forest, beneath the slate cliff, a red kite hovered, its haunting cry sounding eerie and forlorn. He raised his arm in greeting,"Good afternoon, my friend, would that I could join you." 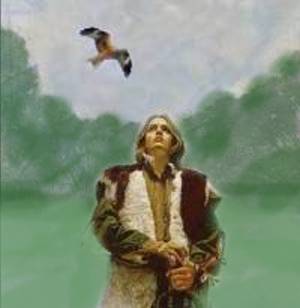 Mist drifted across the valley and the rays of the afternoon sun stained the sky in vivid shades of vermilion and orange. A doe, her fawn at her heels, touched his hand with her nose and a family of squirrels played around his feet. He moved forward slowly, gathering twigs for his fire pit, and glanced around every few moments. He must have imagined it, this sense of someone nearby, no sound disturbed the silence except the twittering of the birds, and the buzzing of tiny insects.

He turned to the doe, "Time to take your baby home now, little one, you too, squirrels." The doe gave him one last affectionate nuzzle, then trotted into the forest, and the squirrels scampered up a nearby oak.

Myrddin walked over to his horse, a sturdy beast, black as a starless, moonless night; its long mane fell in waves, nearly to its knees. Surely, Harri would know if a stranger was nearby, and would have warned him?

"Do you sense danger—has someone followed us?

For insider news and subscriber-only info, subscribe to my occasional Newsletter. I promise not to spam and your in-box will only see an email from me every 3 or 4 months or so - unless of course I have something really Newsworthy to share! http://madmimi.com/signups/196357/join

"For insider news and subscriber-only info, subscribe to my occasional Newsletter. I promise not to spam and your in-box will only see an email from me every 3 or 4 months or so - unless of course I have something really Newsworthy to share! http://madmimi.com/signups/196357/join
Posted by Hywela Lyn at 23:00:00 23 comments

"The Blind Alien is a story with a highly original concept, fascinating
characters, and not-too-subtle but truthful allegories. Don't let the sci-fi label or alternate Earth setting fool you--this is a compelling and contemporarily relevant story about race, sex, and social classes."--Raymond Benson, Former James Bond novelist and author of the Black Stiletto books


Told with one of the most original styles you'll ever experience, The Blind Alien begins when Dr. Malcolm Renbourn, a young history teacher, walks into an ordinary bank on an ordinary day. Suddenly, he feels excruciating pain. Unexpectedly, he loses his sight and discovers he has been drawn against his will across the multi-verse to a slave-holding country on a parallel earth. He doesn't understand a single word he hears, but he soon learns Betan scientists hope his
body carries the cure to an ancient plague that kills 3 out of 4 male babies their first year.


Branded state property, he must escape, but where can a blind man in a strange world dominated by desperate scientists run? And on a world where polygamy is the norm, how can a fugitive alien adapt into becoming the husband of five independent wives who never expected to be the mothers of a generation a planet hopes carry the genes that will change everything? How can Tribe Renbourn survive the aftermath of a catastrophic explosion that kills thousands?

And that's just part of the story.

"A most commendable and unique novel. I can honestly say I have not come
across anything quite like it. The Blind Alien follows the life of an unremarkable man who by some twist of fate is pulled from his world, into that of one parallel . . . What follows is a story of rebellion, politics, love, science, and religion . . . without a doubt, this is an admirably well crafted piece of work, that was both entertaining and very thought provoking."--Tosin Coker, author of The Chronicles of Zauba'ah

Blind Alien is free on KU and only 99c to buy.

Immerse yourself in an extraordinary universe revealed by the most original
storytelling you’ll ever experience. “Science fiction yes, but so much more.”


Besides his 33 years in the classroom, Dr. Wesley Britton considers his Beta-Earth Chronicles the most important work he’s ever done. “I suppose an author profile is intended to be a good little biography,”
Britton says, “but the best way to know who I am is to read my novels.”


Still, a few things you might like to know about Wes include the fact he’s the author of four non-fiction books on espionage in the media, most notably The Encyclopedia of TV Spies (2009). Beginning in 1983, he was a widely published poet, article writer for a number of encyclopedias, and was a noted scholar of American literature. Since those days, for sites like BlogCritics.org and BookPleasures.com, Britton wrote over 500 music, book, and movie reviews. For seven years, he was co-host of online radio's Dave White Presents for which
he contributed celebrity interviews with musicians, authors, actors, and entertainment insiders.


Starting in fall 2015, his science fiction series, The Beta-Earth Chronicles,
debuted with The Blind Alien. Throughout 2016, four sequels followed including The Blood of Balnakin, When War Returns, A Throne for an Alien, and The Third Earth. Return to Alpha will be the sixth volume of this multi-planetary epic.

Britton earned his doctorate in American Literature at the University of North Texas in 1990. He taught English at Harrisburg Area Community College until his retirement in 2016. He serves on the Board of Directors for Vision Resources of Central Pennsylvania. He lives with his one and only wife, Betty, in Harrisburg, PA.

For insider news and subscriber-only info, subscribe to my occasional Newsletter. I promise not to spam and your in-box will only see an email from me every 3 or 4 months or so - unless of course I have something really Newsworthy to share! http://madmimi.com/signups/196357/join
Posted by Hywela Lyn at 23:31:00 2 comments