#WeWriWar, Snippet Sunday - Children Of The Mist: Vidarh is in trouble!

I'm currently sharing excerpts from Children Of The Mist the second book in
The Destiny Trilogy. This is set on Niflheim, a planet close to the heart of Jess, who features in the first book. The heroine is one of her closeat friends, Tamarith.

Vidarh is on his way to Gladsheim, the capital city of the icy planet Niflheim. A telepath, like all Nifls, he is being guided by Tamarith, through the treacherous mountain passages. (A little licence with punctuation to keep within the sentence limit.) 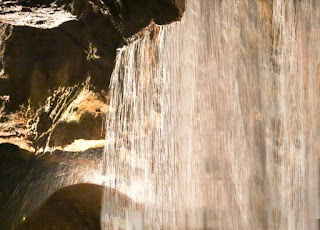 Vidarh noticed several gigantic, human-like statues on the banks as he passed, but had no time to contemplate or admire them. Rounding a bend, he came upon a wall of water ahead, cascading from the roof in a fury of white froth. The torrent boiled and raced. He gritted his teeth as he headed into the maelstrom, there was no way he could control the boat's frantic motions as it heaved and bucked like an unbroken colt. He threw down the paddle, gripped the sides of the vessel, and sent a desperate message through the ether.

Tamarith, I'm in trouble. Please—send me images of your location, quickly, I need to know what it looks like where you are.

The raging current tossed the boat around with relentless fury. All Vidarh's attention focussed on maintaining contact with Tamarith, and even his finely-tuned powers could not prevent the craft from capsizing. Gasping as he hit the icy flood, he struck out with his arms in desperation, and tried to keep the watery demons from pulling him under.

Two minds united against a common foe. Two hearts afraid to show their love: Long ago Tamarith fell in love with a man she can never have, and is convinced she will never love another. However, she cannot help but be intrigued by a handsome stranger whose psychic powers exceed even her own.

For insider news and subscriber-only info, subscribe to my occasional Newsletter. I promise not to spam and your in-box will only see an email from me every 3 or 4 months or so - unless of course I have something really Newsworthy to share! http://madmimi.com/signups/196357/join
Posted by Hywela Lyn at 23:00:00 18 comments