I hope you enjoy today's legend.  I'm away for a few days visiting relative in Wales, so please excuse me if you comment and I don't get back to you.  I promise I will answer as soon as I am able.
The story of Blodeuwedd (Blaw - dow- ith) is one of the legends belonging to the Mabinogion, a famous collection of old Welsh legends.

When he grew to manhood, Lleu called upon his two uncles, who were the wizards, Gwydion and Math,  to help him find a wife. 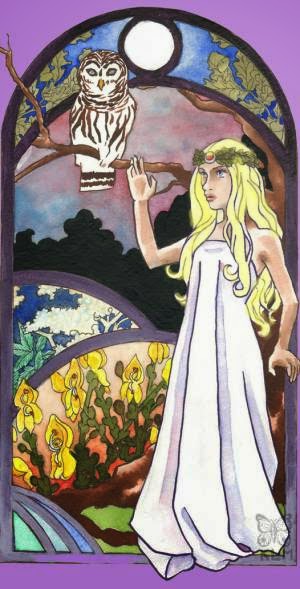 After she had become Lleu's bride, and they had feasted, Matb said, “I will give the young man the best Cantrev to hold.The Cantrev of Dinodig.” The place was a palace in a spot called Mur y Castell,the old name for Tomen-y-Mur  near Traswfynydd There Lleu and Blodeuwedd reigned, and were beloved by all.

Not long after the marriage, Lleu left Blodeuwedd alone in their castle at Tomen y Mur  as he needed to visit his uncles on business. She became bored and lonely, Then one day a hunting party approached the castle, led by Gronw Pebyr, the lord of nearby Penllyn. He told Blodeuwedd that his party was looking for somewhere to stay and Blodeuwedd invited them to stay in the castle. She became infatuated with Gronw Pebyr and the two began an affair. They decided to kill Lleu, so she and Gronw could be together. However, Lleu couldn’t be killed in any normal way,
not during the day or night,  neither riding nor walking, not clothed and not naked, nor by any weapon lawfully made.

When Gronw and his hunting party left and Lleu returned, Blodeuwedd pretended to be worried about his safety and asked him what method could be used to kill him,   He revealed  that he could only be killed at dusk, wrapped in a net with one foot on a cauldron and one on a goat and with a spear forged for a year during the hours when everyone was at mass. Blodeuwedd went to Gronw Pebyr with the information and they arranged his death. Gronw Pebyr  began working on a spear immediately. 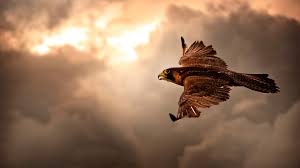 Exactly one year later, Blodeuwedd convinced him to demonstrate how impossible it would be for him to be in the position where he could be killed, by chance, and when he did so, her lover Goronwy leapt out and struck with the spear he had been forging for one year during the sacred times of mass. Because Lleu  had one foot on the side of a metal cauldron  and the other on the back of a goat, Gronw’s plan was successful. But what Lleu had not told Blodeuwedd was that he could lose his life. Instead, as soon as the spear hit him, Lleu turned into an eagle and flew away into the forest. 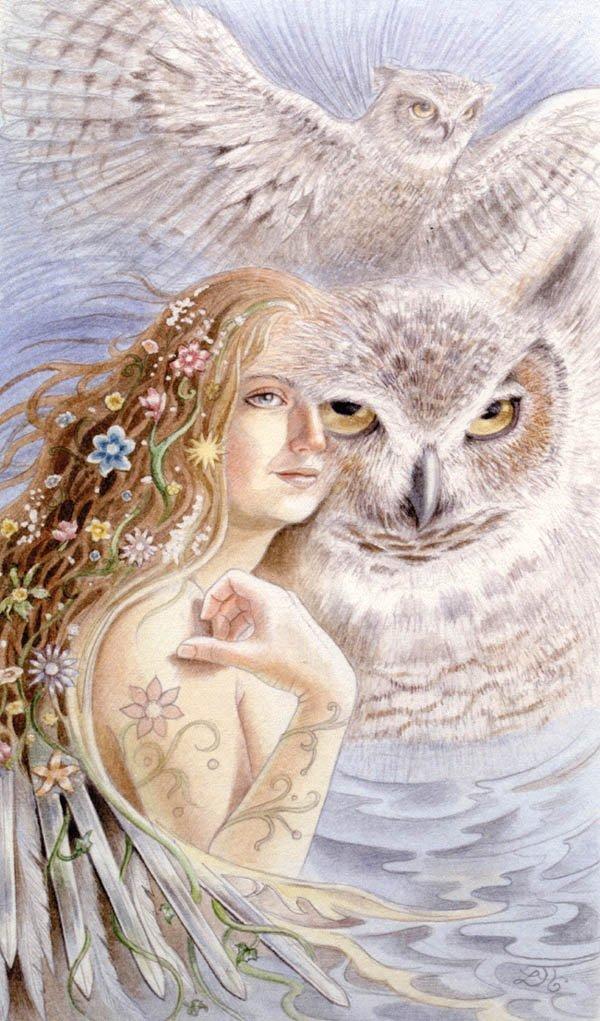 After hearing the news, the  wizard Gwydion set out to find Lleu. He found him in a tree in the forest nearby, living off the meat of a wild boar lying at the footof the tree. Because of his magic powers, Gwydion was able to turn Lleu back into a man.

Lleu set out to find Gronw Pebyr and Blodeuwedd. Lleu killed Gronw Pebyr, but  Blodeuwedd had run to the forest.  Gwydion managed to corner her and as punishment for what she had done, he turned her into a tawny owl, telling her that every other bird would fear her and thus she would have to live the rest of her life in solitude.

The name of Lleu and Blodeuwedd's castle in the tales,Mur y Castell, is  thought to be an early reference to the site where later the
Roman fort of Tomen y Mur was built, near Trawsfynydd.
Posted by Hywela Lyn at 06:00:00 2 comments