It's my great pleasure to welome friend and fellow Wild Rose Press author Debby Grahl to the Flight Deck today, with her new release His Magic Touch.
Congratulations on this new book, Debby, I've just read it and you can read my review HERE (I review s Lyn)Let's find out a bit more about it for the readers. 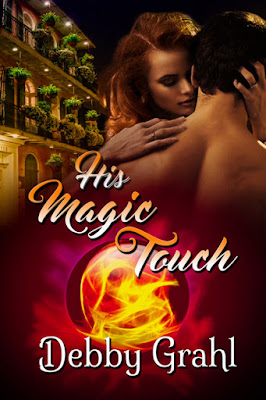 BLURB: The night before Jared Dupre's wedding, a specter warns him the demonic witch, Adam Montief, has kidnapped his brother in a centuries-old vendetta unknown to Jared. A powerful witch himself, Jared tracks Adam from New Orleans to a remote island off the coast of Connecticut where he's given no choice. He must rescue his brother and break his engagement to Kendra O'Connell, or they both die. After complying, Jared engages in a sword fight and believes he has vanquished his foe, but when he returns to New Orleans, he finds evil still threatens all he loves. Kendra, not knowing why Jared broke their engagement, devastated, finds solace in another's arms. With help from an ancestor's spirit, can Jared defeat the dark magic descending over the Big Easy while winning back the woman he loves?

EXCERPT:
In the stifling heat, Angelique Montief flicked her wrist and set the bamboo ceiling fan spinning. Kneeling on a woven mat with sweat coating her body, she lifted a small wooden brass-bound casket from the bottom of a large trunk, inserted a gold key, and opened the lid. Inside two objects lay wrapped in thick cloth. She carefully unwrapped the smaller bundle to reveal a pentagonal mirror, a gift handed down to her by her grandmother, its ancient oak frame carved with tiny pentacles.

She glanced over her shoulder at her locked bedroom door, then stared into the mirror and whispered, “Show him to me.” When the glass remained blank, fear clutched at her chest. Again, she said the words, and the image of a plantation house engulfed in flames appeared. “No, please, he can’t be dead. ”Tears blurred her vision. The fiery image changed to reveal a human form lying beneath flowering bougainvillea. “Show me his face.” 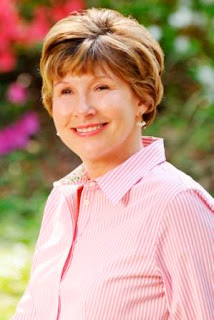 Debby Grahl lives on Hilton Head Island, South Carolina, with her husband, David. Besides writing, she enjoys biking, walking on the beach and a glass of wine at sunset. Her favorite places to visit are New Orleans, New York City, Captiva Island in Florida, the Cotswolds of England, and her home state of Michigan. She is a history buff who also enjoys reading murder mysteries, time travel, and, of course, romance. Visually impaired since childhood by Retinitis Pigmentosa (RP), she uses screen-reading software to research and write her books.
Her first published book, The Silver Crescent, won the Paranormal Romance Guild Reviewers’ Choice award. Her second book, Rue Toulouse, a contemporary romance set in New Orleans, was a finalist in the National Excellence in Romantic Fiction Award and was selected as a May, 2016, ‘local read’ by Hilton Head Monthly.

Decorated to Death is a holiday mystery cozy. She also has stories in three anthologies, The Haunted West, Never Fear/Christmas Terrors; and Ebb and Flow from the local Island Writers’ Network.
Debby was featured in the January, 2016, Hilton Head Monthly article ‘Intriguing People of the Lowcountry’. She is a member of Romance Writers of America, Florida Romance Writers, and First Coast Romance Writers.

BUY IT NOW from TWRP
AMAZON