#SundaySnippets, #WeekendWarriors, 'Dancing With Fate' - In the name of Hades, she had never seen anything like this before.

Hello fellow  Snippeteers and readers.  Welcome to my Weekend Warriors post. I'm continuing  with another snippet from my fantasy novella, Dancing With Fate. Thank you to everyone who's been following my snippets so far.


Having fulfilled the mission set by Apollo, Terpsichore the muse of dance is preparing to return to Olympus when she meets the mysterious Myrddin. Unaware of her goddess status, he invites her to share a meal with him
She refuses to allow him to accompany her but with the coming of darkness, they settle down for the night.


SNIPPET (as usual, some creative punctuation to comply with 10 sentence rule) 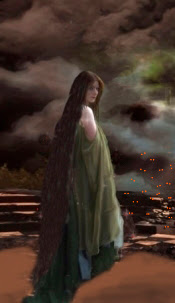 The glowing red sparks appeared a few hours before dawn. Terpsichore looked across to where she could just make out Myrddin, lying close to the fire, apparently asleep. She stood and wrapped her brat around her shoulders. What unearthly lights were these? In the name of Hades, she had never seen anything like this before. She watched them as they advanced and retreated, advanced and retreated. They seemed to beckon to her. She walked forward a few steps. This was not natural. She sensed evil, but of a kind she had never come across before.


She tried to turn her head, to look away and move back to the fire. Some force compelled her to keep staring at them, to move forward. Further and further from the campfire she wandered. The air grew chill and she pulled her brat more closely around her. The flickering lights gyrated in a wild dance, inviting her to follow them. Dawn was approaching. In the dim early morning light, she could make out demon faces, red glowing eyes, hands outstretched, with flames at their fingertips.