Welcome to Weekend Writing Warrior and 8 Sentence Sunday, the weekly hop for everyone who loves to read and write fiction!

Be sure to visit the other writers - they're listed in the link Below: 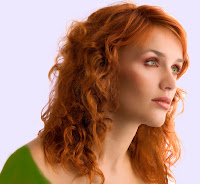 I'm currently posting snippets from Starquest, Volume 1 in the Destiny Trilogy . The more she gets to know the crew, the more Jess feels uneasy about Kerry Marchant, the ship's second in command. The cover for Starquest did not quite depict Jess as I imagined her, in fact the model is very different from the young woman I had in mind. I loved the background but wish I could have asked the cover artist to change the model. This is more like I how imagine Jess:

It had been a mistake to bring her on board.
Kerry Marchant studied Jess out of the corner of his eye while ostensibly examining the circuitry in one of the control panels on the flight deck. But of course they’d had no option, she would have died without their assistance.

He was struck by how gracefully she moved, the slender curves of her body accentuated by the dark green bodysuit of clinging, soft synthehide. Her thick, flame-red hair hung in waves over her shoulders and down her back. There was no denying she was pretty. He allowed himself a half smile - no she was far more than ‘pretty.’ He’d had his share of beautiful women in the past, although none of them had made a lasting impression. It was not that Kerry disliked women; there were even one or two, like Zeldra, whom he not only liked but admired and respected. He simply did not trust the majority of them. This and the other two books in the Destiny Trilogy can be seen and purchased at:
https://www.amazon.com/Hywela-Lyn/e/B002BMBXH4/

(All three books can be read as 'standalones')


For insider news and subscriber-only info, subscribe to my occasional Newsletter. I promise not to spam and your in-box will only see an email from me every 3 or 4 months or so - unless of course I have something really Newsworthy to share! http://madmimi.com/signups/196357/join
Posted by Hywela Lyn at 23:30:00 27 comments

Congratulations to Janine Gallant on the release of her romantic suspense novel
Wilde Horses. As a horse lover myself I love the premise of this book!

The Wilde brothers may be attracted
to all things fast and furious. But their spirited sister can’t be
tamed when it comes to matters of the heart . . .

The beautiful vistas and peace and quiet on her family’s Wyoming ranch are a balm for Eden Wilde’s soul—and inspire a gentle touch when it comes to breaking the wild horses she loves. Though there’s no hope on the breathtaking

horizon for her love life. Until her sanctuary is invaded by a movie studio shooting their latest blockbuster starring Hollywood’s man of the moment.

After a personal tragedy plays out in his real life, movie star Blake Benedict finds himself falling for the wide-open spaces and easy going pace of Wyoming—and for Eden. Around her, he feels safe shedding his public persona and letting
down his guard. But then accidents begin to happen on set, mishaps
that could end Blake’s career—or his life. And Eden will be forced out of her comfort zone to save the Hollywood hero from an enemy he never saw coming...

Write what you know. Jannine Gallant has taken this advice to heart, creating characters from small towns and plots that unfold in the great outdoors. She grew up in a tiny Northern California town and currently lives in beautiful Lake Tahoe with her husband and two daughters. When she isn’t busy writing or being a full time mom, Jannine hikes or snowshoes in the woods around her home. Whether she’s writing contemporary, historical or romantic suspense, Jannine brings the beauty of nature to her stories.

Follow
the tour HERE
for exclusive excerpts, guest posts and a giveaway!

For insider news and subscriber-only info, subscribe to my occasional Newsletter. I promise not to spam and your in-box will only see an email from me every 3 or 4 months or so - unless of course I have something really Newsworthy to share! http://madmimi.com/signups/196357/join
Posted by Hywela Lyn at 23:30:00 5 comments

It's the final week of voting for the RONE awards

A  Fellow Wild Rose Press author is nominated this week:
in YA Paranormal/Fantasy/SF

The other sections are:  Mystery
and

Contemporary - Steamy -  Several Wild Rose Press Authors in this category,: Robena Grant, Joyce M Holmes and Anni Fife - there may be others and if I've missed a name I really apologise, it certainly wasn't intentional. So many wonderful books all deserving of votes!
There are over 25 nominees in this section so you can vote for TWO nominees (But you have to vote for both at the same time.)

All you  have to do is  click on the link for the RONE award voting page
and follow the very easy instructions from there. You won't be committing yourself to anything other than the right to vote.]

It doesn't take long to cast your vote and I know each nominee will be really appreciative of anyone who votes for them!

For insider news and subscriber-only info, subscribe to my occasional Newsletter. I promise not to spam and your in-box will only see an email from me every 3 or 4 months or so - unless of course I have something really Newsworthy to share! http://madmimi.com/signups/196357/join
Posted by Hywela Lyn at 09:00:00 0 comments