For the past few weeks I've been sharing excerpts from Starquest, the first of  Destiny Trilogy. Thank you so much, everyone who's been following and commenting.

Last week I introduced you to Niflheim the home planets of the two telepathic members of the Destiny's crew and where an important part of Starquest takes place. Niflheim is an Earth colony named after the Norse land of mist and cold. Many of the places and inhabitants are also named after characters and places in Norse legends. The descendants of the original settlers developed their powers of telepathy in order to communicate over vast areas having abandoned all technology. Parts of the planet are reasonably temperate and they have evolved a rural lifestyle and an economy based on the bartering of skills and produce. 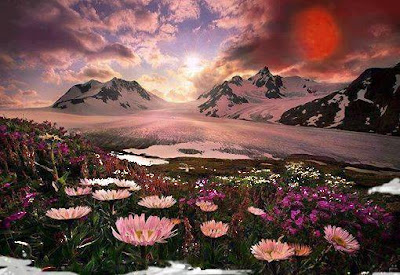 The ice-cold mist swirled like a living creature, driven by the wind. Vidarh glanced behind him. The distant mountains were almost hidden, their summits mantled in thick cloud. Somewhere an icecat howled, its mournful cry echoing through the mountains and sending ghostly fingers racing up and down his spine. Ahead lay a dense forest, and beyond it, the place he  sought.

The trail through the trees led ever upward,
and the sure-footed pony snorted and panted with the exertion. The mist blotted out much of the light from Niflheim's two suns. Although a faint eerie glow from the red giant managed to filter through, it did nothing to make the journey easier or the path between the massive trunks clearer.

For insider news and subscriber-only info, subscribe to my occasional Newsletter. I promise not to spam and your in-box will only see an email from me every 3 or 4 months or so - unless of course I have something really Newsworthy to share! http://madmimi.com/signups/196357/join
Posted by Hywela Lyn at 23:42:00 26 comments