Hello my lovelies! I hope you're staying safe and well and managing to survive 'lock down'. Last week I told you about Merlin's Oak, in which I mentioned the owl, 'Blodeuwedd'. This is the legend of Blodeuwedd:

Lleu Llaw Gyffes' own mother, the goddess Arianrhod, tried to prevent her son Lleu from receiving his birthright to become the king, by saying he would never have a a name, unless she gave it, he would not receive his arms, other than from her and, he could never marry a mortal woman. Thus, he could not become king, unless she willed it.


The Celts were matrilineal; a person was born to their mother’s line, not their father’s. Therefore, the son of the king’s sister and not the son of the king and the queen was seen as the heir to the Kingship. Often the queen held the actual power, with her husband being a warlord rather than a king in the true sense of the word. In order to be a king, he had to 'marry' the land. This was often accomplished by the practice of the symbolic Great Rite between the proposed king and a priestess.

However Arianrhod was tricked into giving Lleu his name and his arms but he still needed a wife in order to assure his right to the land.


To overcome this problem, the magicians Math and Gwydion took the flowers of the oak, the broom, and meadowsweet, and from those they conjured up the fairest and most beautiful maiden  ever seen. and named her Blodeuwedd, 'Flower Face', and she and Lleu were duly married, although Blodewydd doesn't seem to have been give much actual choice in the matter, so it's perhaps not surprising that while Lleu was away, hunting, Blodeuwedd fell in love with, and had an affair with a warrior, Gronw Pebr, the lord of Penllyn, and the two lovers conspired to murder Lleu.

There was only one way that Lleu could be killed, and Blodeuwedd managed to persuade Lleu to reveal the exact situation that would cause this, by pretending to be concerned about his possible death.  He revealed that he could not be killed during the day or night,  indoors or outdoors, neither walking nor riding,  clothed or naked, nor by any lawfully made weapon. He could only be killed at dusk, wrapped in a net, with one foot on a bath and one on a black goat, by a riverbank and by a spear forged for a year during the hours when everyone was at Mass.

Armed with this knowledge, Gronw and Blodeuwedd prepared a bath on a riverbank, covering it with a thatched roof, thus making it neither indoors nor out.  Lleu was tricked into standing with one foot upon the edge of the tub and the other upon the back of a goat and wrapped in a net. Gronw threw a specially-made spear, hitting Lleu in the side, but instead of being killed, Lleu turned into an eagle and flew off.

Gwydion tracked him down and found him perched on an oak tree. The magician lured Lleu down from the oak tree and switched him back to his human form. Gwydion and Math nursed Lleu back to health before  reclaiming his lands from Gronw and Blodeuwedd, who fled, but were overtaken by Gwydion. He turned Blodeuwedd into an owl. saying "You will not dare to show your face ever again in the light of day, because of enmity between you and all other birds. It will be in their nature to harass you and despise you wherever they find you. And you will not lose your name - that will always be 'Bloddeuwedd'. 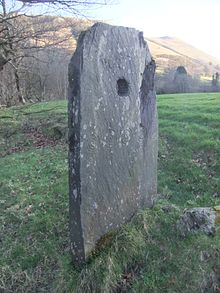 Meanwhile, Gronw fled to Penllyn. Lleu refused his plea for forgiveness, demanding that Gronw stand on the bank of the River Cynfael and receive a blow from his spear.  Eventually, Gronw agreed on the condition that he be allowed to place a large stone between himself and Lleu.  Lleu agreed, then threw the spear with such strength that it pierced the stone, killing Gronw. A holed stone in Ardudwy is still known as Llech Ronw (Gronw's Stone).

If you're at a loose end in these strange and rather scary times, there are so many great books out there to be read, try a new author. If you'd like to listen to a book rather than read it, You can get my Destiny Trilogy for FREE.