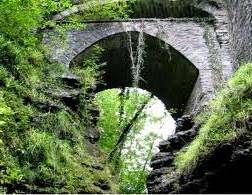 Hi everyone, I hope you're still staying safe and well.

As a change from rather scary Welsh creatures, this week I thought I 'd turn to a rather more light hearted tale - the legend of Devils's Bridge. I have featured this before but if you haven't heard it before, I think you'll enjoy it - and if you have, I hope you don't mind me repeating it. It's one of my favourite Welsh legends. 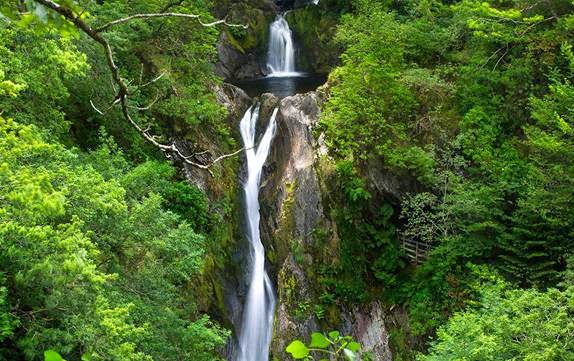 I used to live near a well known beauty spot called Pontarfynach, or Devils Bridge. It is really three bridges, built over a spectacular and beautiful waterfall, which rages down into a deep pool known as the Devils Punchbowl. The first bridge was built by the Monks of Strata Florida, (where the Holy Grail is reputed to have been hidden for a while) in 1075. In the 18th Century it was deemed to be unsafe, and a second bridge was built, over the first. The third bridge being built over that in 1901. I thought it would be nice to share the legend of how the first bridge was built:

An old woman had a cow of which she was very fond, and which provided her with all the milk she needed. Early one morning she was distraught to find that the cow had somehow managed to cross the river and was now grazing on the bank the other side. The old lady looked at the swirling river and wondered how she would be able to get her cow back. “What the Devil can I do now?” she asked aloud.

At once there was a smell of sulphur and a cloud of thick smoke, out of the middle of which appeared Old Nick himself! “You called?” he smirked. The old lady was made of stern stuff, and after a moment’s hesitation, she explained her predicament. Satan grinned wickedly. “That’s easily sorted,” he said craftily, “I can build you a bridge – but it will cost you.”

“How much?” the old lady asked uneasily. “Oh nothing much, just the soul of the first living thing to cross the bridge,” the Devil stated cunningly, knowing full well that she would have to cross the bridge herself to get her cow. 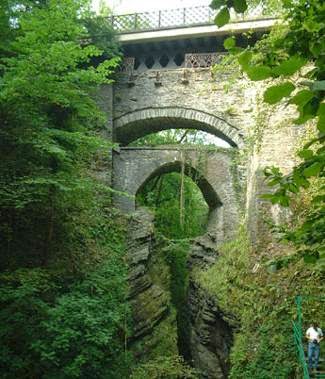 “Done!” said the old woman. The Devil waved his arms and there, spanning the falls, was a beautiful new stone bridge. The Devil laughed nastily, “Now for my payment he said smugly. The old lady was not as naïve as she appeared. She put her hand into her apron pocket and drew out a crust of bread which she had put there for her breakfast, and threw it across to the other side of the bridge. Immediately her little dog ran across the bridge and gobbled it up.

Satan knew he had been outwitted, the soul of a dog was of no use to him; he scowled furiously and disappeared in an even bigger cloud of foul smelling black smoke than the first, and was never seen in those parts again. The old woman crossed the lovely new bridge, and having retrieved both her cow and her dog, made her way home, humming softly to herself. The bridge still remains, to this very day. (Although two later bridges have been built above it, and today it has the usual tourist trappings.)

You'll rarely see the Devil in Wales these days, local folk say he's too embarrassed to show his face!

If you'd like to listen to a book rather than read it, there are some really great books available in audio.
(You can get my own Destiny Trilogy for FREE.)