The legend of Merlin's Oak

Happy Monday, my lovelies, I hope today finds you well and safe, and not too frustrated by 'lock-down.'

As promised, I thought I'd tell you about Merlin's Oak, which stood in the centre of Carmarthen town. (I was lucky enough to see the remains of it before it was removed.)

Legend has it that King Arthur’s famous wizard placed a protective curse on the tree. The wizard said Carmarthen would 'drown' if the oak was ever removed. Some folk said a curious, pointed notch in the tree was the face of Merlin himself.

Sadly, in the 1850s, a local vicar, who objected to young people courting beneath it, but its trunk was preserved within iron railings. In the year 1951, a branch was broken off of the tree and it lies now in the Carmarthen Museum. It was  removed from the town when someone set it on fire at the end of the 1970s.

Carmarthen then suffered its worst floods for many years. In 1978, the last remaining fragments  of the tree-stump were  placed in Carmarthen’s Civic Hall.

(The name Myrddin is  the second element of the place-name Caerfyrddin, the Welsh name for Carmarthen) and I'm happy to say Carmarthen is still standing, indeed flourishing, despite the floods that caused so much devastation.)

However, in a way,  Merlin’s Oak is back in Carmarthen, the town which he said would fall “when Merlin’s Tree shall tumble down”.

A Cambridge-born sculptor, living in Wales, bought a 500 year old oak which had been felled in Carmarthen to make way for a new superstore. The sculpture is one of the centrepieces of a spectacular  town centre shopping development called Merlin’s Walk.

Before the carving began, Mr Hedger,said: “The townspeople of Carmarthen will breathe easier whenMerlin’s Oak is back in the town centre.“We will have an oak which definitely has Merlin inside it – back where he belongs.” 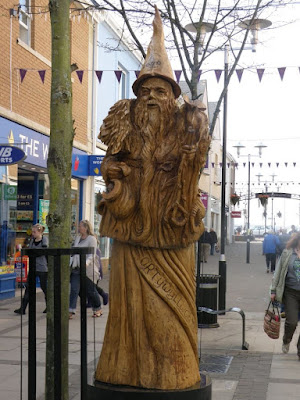 The statue of Merlin is adorned with the symbols of nature and the Celtic religion that for him was a way of life. 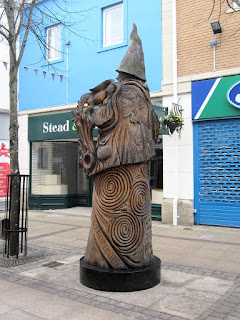 "From his twisted honeysuckle beard that falls from his smiling face which holds his bardic wisdom. On his left shoulder sits the dragon of nature's temptation and in his hand the three sticks and a
rope with thirteen knots; a druids measuring kit, in the other, a bag of healing herbs from the garden of your imagination. The feathered horn of the orax hangs on his shoulder, whilst the La Tène torc is tied to his belt.

Embroidered on his back is the story of Blodeuwedd, for in the day the eye of the owl is the open flower but at night blodeuwedd is the owl. Ortywyllwch Ir goleuni, from the darkness into the light, as meant in Welsh, to be inspired. These are the words that are carved into the trunk of Myrddin. Where the three spirals ripple from the water source, you can run your finger through the journey of life to the labyrinth."

FREE AUDIOBOOKS
If you're at a loose end in these strange and rather scary times, there are so many great books out there to be read, try a new author. If you'd like to listen to a book rather than read it, You can get my Destiny Trilogy for FREE.