Welsh Myths and Legends The tale of Manadden and the mouse

Hello my lovelies, I have another Welsh myth for you this

week, with a much less threatening creature than some I have featured.

The lord Manadden, who had been campaigning in Ireland, returned to Narbeth in mid Wales, to find his lands had been usurped. After a while, he met and fell in love with Rhiannon, the widow of Pwyll, and the goddess of horses, and soon they were married.

Some time later, a fierce storm rose up and the land was covered with mist. When it cleared they saw that the countryside was deserted. All the animals, cottages and people had vanished. 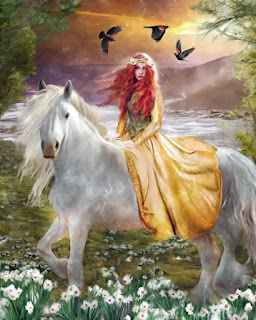 He and Rhiannon's grown up son, Pryderi, set out to discover what had happened and came across a deserted castle with a golden fountain. When they touched the fountain, he and Pryderi were instantly struck dumb, Rhiannon arrived in search of her son and husband and she too was stuck dumb. Then, with a sound like thunder, the castle and  Rhiannon and her son vanished. Manawdden was stricken with grief and turned his back on the land, to earn his living as a shoemaker in Hereford, but he was so good at cobbling that angry competitors threatened to kill him and he went back to Narbeth where he bought some land and settled down to the life of a farmer. He was as good a farmer as he had been a cobbler, and at harvest time he had three large fields of best quality wheat ready to be cut. "I will reap this to-morrow," he said and early the next morning went out to reap the first field. When he came there he found nothing but the bare straw. Every one of the ears of the wheat was cut from off, and all the ears carried away, leaving nothing but the straw. This also happened to the second field. He went to the third field and it was also ripe and he vowed to watch over it and catch the thieves red-handed.

At midnight there was a tremendous roaring sound and there appeared the largest hoard of mice ever seen, far too many to be numbered. Each mouse climbed up the wheat stem and bending it down with its weight,  cut off one of the ears of wheat, and carried it away, leaving just the stalk, then they all left taking the ears of wheat with them.

He rushed after them in a rage, but they all escaped except one, which he caught  and put  in his glove, tying the opening with string, and returned home. Then he went to the Gorsedd (a  Bardic throne) of Narberth, taking the mouse with him. And he set up two forks on the highest part of the Gorsedd, intending to hang the mouse.  While he was doing this, a scholar, dressed in rags, came toward him, and enquired what he was doing.

"I am hanging a thief that I caught robbing me," he replied.

"But it's only a mouse, set if free," said the scholar. He then offered him a pound to set the creature free but Manawyddan refused. "I will not let it go free, he said. "It is a thief and will pay the penalty for stealing."

Then a priest on a fine horse rode up and offered Manawyddan three pounds if hewould let the mouse go, but again he refused.

Then he noosed the string around the mouse's neck, and as he was about to draw it up, a rich bishop rode toward him, with a retinue of packhorses and servants, and again bargained for the mouse to be set free. He eventually raised the price of the mouse's release to twenty four pounds, together with all the pack horses and the their loads. Still Manawyddan refused, and the bishop asked what he wanted to reprieve the mouse. When Manawyddan insisted on knowing the truth, the bishop told him that the mouse was his wife. who was with child, hence her inability to run fast enough to get away, and he was a mage and the one who had cast the charm in revenge for the bag-trapping trick Rhiannon had pulled on the man who had wanted to marry her, many years ago. He'd turned his servants and the villagers into mice to strip the wheatfields, and his wife and ladies of the court also asked to be turned into mice, to join in the destruction of the harvest.

Manawyddan demanded that Rhiannon and Pryderi should be set free, and  the illusion of the castle be removed. He also elicited a promise that there would be no vengeance taken either on him, Rhiannon or Pryderi, that he would never cast a spell over the land again and that Rhiannon and Prederi immediately appear before him.

Llwyd agreed and as his wife and stepson came toward him, Manawyddan at once released the mouse.Then Llwyd struck her with a magic wand, and she was changed back into a beautiful young woman.

"Look around upon your land," Llwyd told him "and you will  see it all tilled and the people and dwellings restored.

And so it was.

If you like to listen to a book rather than read it, there are some really great books available in audio.
(You can get my own Destiny Trilogy for FREE.)