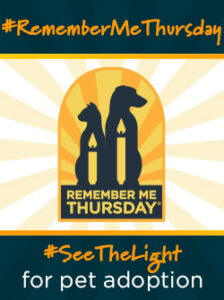 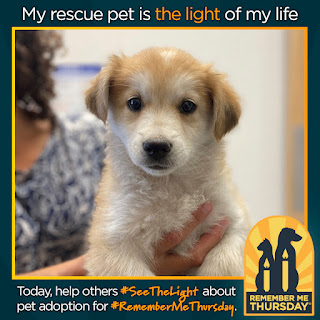 This isn't a book related post, but anyone who knows me knows how much I love animals. 'Remember me Thursday' is to think of the unwanted animals who have lost their lives because no-one wanted them, and to urge anyone thinking of getting a pet to consider adopting, instead of purchsing from a breeder. Many dogs, cats and other pet animals end up in overcrowded shelters, and some will, sadly, be euthanazed, not because they're unmanageable or dangerous, but simply because
they've ended up homeless, through no fault of their own, and no-one wanted to give them a second chance.

My own little dog, Choccy, is a 'rescue'. Before my husband and I adopted him from the Blue Cross, he had spent the first two years of his life locked up, never played with, never taken for walks, and with absolutely no training.

From the start, he was the most loving little dog, and took to us straight away. He was hard work though, because he'd never been socialised with other dogs, he was afraid of them, and would bark and spin whenever he saw one. However, with much patience and copious treats, he gradually learnt that other dogs were usually friendly and nothing to be frightened of, and that cars and buses were also something he could walk past without going 'crazy bonkers' as my lovely neighbour laughingly called it. He is also very clever, and in no time had learnt the value of 'positive reinforcement'. i.e. treats and praise for good behaviour. Two days after we adopted him he was fully housetrained, and soon learnt how to 'sit' 'come' and 'lay down' etc. and his zany character began to show itself. Eight years later his position as head of the household is well established. Since my husband passed away two years ago, he has been my faithful companion and now sleeps snuggled up next to me. I honestly don't know how I'd have coped without his love and companionship.

Rescues are so worth it, and will repay your kindness a hundredfold!