Apologies for missing my post last week - its been somewhat hectic as my husband has been in hospital (thankfully not the virus, and he's out now) but it's been a worrying time and I just haven't had the time to devote to my writing or my blog. Anyway, I'm back now, and as  a horse lover, I couldn't resist telling you about Rhiannon - a horse goddess depicted in the Mabinogion, a collection of Welsh folk tales. 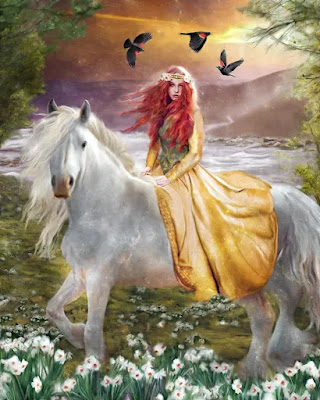 Rhiannon was married to Pwyll, the Lord of Dyfed. When Pwyll first saw her, she appeared as a beautiful woman dressed in gold, riding a magnificent white horse. Rhiannon managed to outrun Pwyll for three days, and then when he shouted to her to stop, allowed him to catch up. When he said he'd fallen in love with her and wanted to marry her, she scolded him for not telling her  to stop before, and making his poor horse work so hard. Then she said she'd be happy to marry him, because it would save her from marrying Gwawl, who she despised and who had tricked her into an engagement. Rhiannon and Pwyll conspired together to deceive Gwawl and thus Pwyll won her as his bride.
Three years after they married,  Rhiannon gave birth to a son, but he disappeared at night while his nursemaids, who were supposed to have been watching over him, fell asleep. Frightened of the consequences, the nursemaids smeared the blood of a dead puppy on the face of their sleeping queen. When she awoke, Rhiannon was accused of killing and her son and eating him. As penance, she was made to sit outside the castle walls, and tell passers by what she had done. Pwyll, however, stood by her,  refusing to send her away or have her more severely punished.

The newborn child had been in fact found by Teyrnon, the lord of Gwent-Is-Coed. He was a horse lord whose beautiful mare gave him a foal every May Eve, but  each year. the foal would disappear. Before his mare had her next foal he took her into his house and sat vigil with her. After her foal was born he saw a monstrous claw trying to take the newborn foal through the window, so he slashed at the monster with his sword, before rushing outside. He found the monster gone, and a human baby lying by the door. He and his wife cared for the boy as their own, naming him Gwri Wallt Euryn (Gwri of the Golden Hair). The child grew rapidly, and had a great affinity for horses. As the boy grewTeyrnon who once served Pwyll as a courtier, recognised his resemblance to his father. He was an honourable man, and so he returned the boy to the Dyfed royal house.

Rhiannon is also connected to three mystical birds. The Birds of Rhiannon (Adar Rhiannon) appear in the Second Branch, in the Triads of Britain, and in Culhwch ac Olwen. In the latter, the giant Ysbaddaden demands them as part of the bride price of his daughter. They are described as "they that wake the dead and lull the living to sleep."

FREE AUDIOBOOKS
If you're at a loose end in these strange and rather scary times, there are many great books out there to be read, try a new author.

If you'd like to listen to a book rather than read it, again there are some really great books available in audio.