Tragically we had to have him put to sleep last Thursday. He had several brain tumours and had slowed down over the last few months, although he was still happy and mischievous, and very, very 'knowing'.  On Wednesday night he started having convulsions and on Thursday we had to make the terribly sad decision to make sure he did not suffer any more.

Bouncer first came into our lives in September 2007.  I had emailed an animal shelter in Wales and they sent me his picture. There were other dogs available for rehoming, but how could I possibly refuse that little face and the silent plea in those dark eyes?  I knew he was meant to be ours. 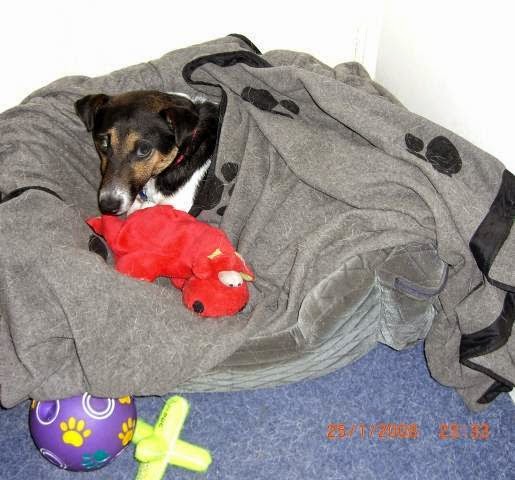 From the minute he stepped through the door it was as if he'd always been part of the family.  I put the blanket we'd bought for him which he'd been lying on, on the way home, in his bed and he climbed straight into it and curled up, quite at home.  Among his new toys was a red, plush dragon which he 'loved' to death. After a few weeks it was as flat as a pancake, and missing its eyes and horns, but he slept with it every night of his life with us. 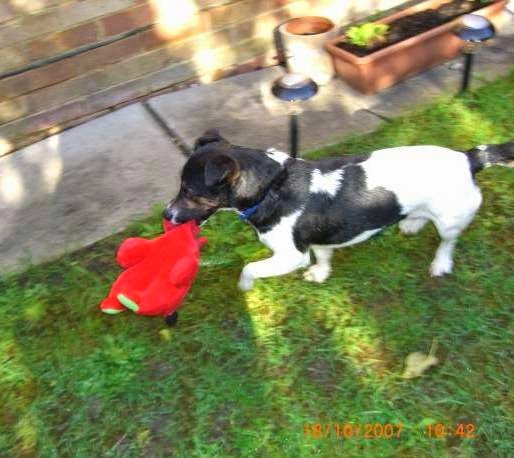 He'd been badly treated in the past, and his hip had been broken and allowed to heal without a vet, so it healed a bit crooked and he walked with a bit of a swagger, with his feet pointing to a quarter to three, like a little penguin, as he 'sashayed' along.

He was such an inquisitive little dog and soon found a small hole in the garden fence where he could spy on next door's cat. 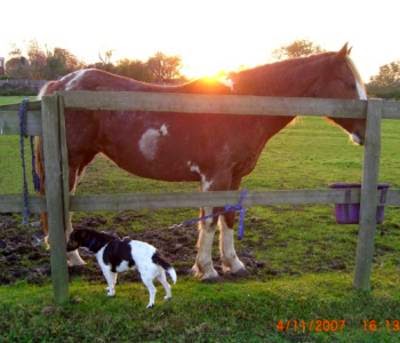 He loved going down  to the horses with us, and would investigate every nook and cranny of the feedroom, where he could probably smell the resident mice and our 'feral' stable cats. 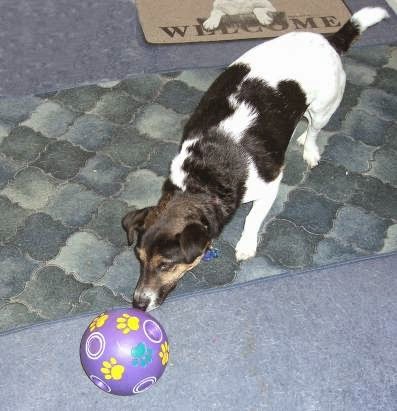 His favourite thing in the world was his 'treatball' and as soon as he finished his morning and evening meals he would sit and ask for it to be filled with treats and chase it around, batting it with his nose or his paw to get the treats out with a dexterity and expertise that would have made David Beckham green with envy! 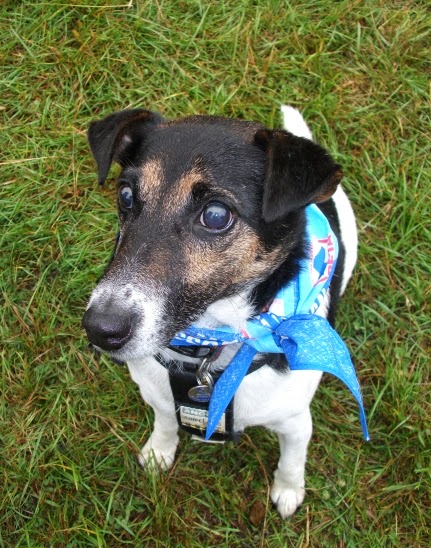 About two years ago he started to lose his sight and gradually went completely blind, but he didn't allow it to interfere with his enjoyment of life and still managed to get around and play with his treatball and enjoy his daily 'walkie'. In November last year he had what the vet at first thought was a 'mini stroke' but scans revealed to be inoperable brain tumours. We were devastated.  How could our clever, happy little dog have this inflicted on him on top of everything else?  For a while we thought we were going to lose him, but he was such a little fighter and after a week or so on new medication, bounced back, true to his name, and it was hard to believe there was anything wrong with him, he certainly didn't lose any of his zest for life, or knowing ways, and was still as bright as a button.

We went 'home' to Wales for a few days last week and while we were there he began to have convulsions and we knew it was time to say goodbye to our beloved little friend and companion. He is buried, his paw resting on his red dragon,  in a lovely, peaceful spot on my sister's land, with her two dogs. It seems fitting that he should be laid to rest in Wales, where he came from.  He will be sorely missed by us and everyone who knew him, and will never ever be forgotten.  Rest In Peace little Bouncer, and wait for us at the Rainbow Bridge. 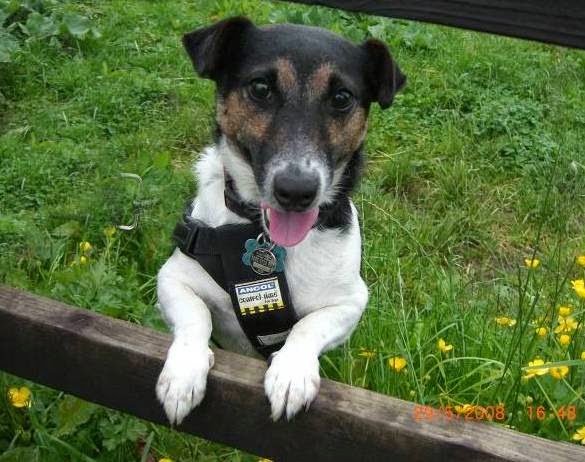