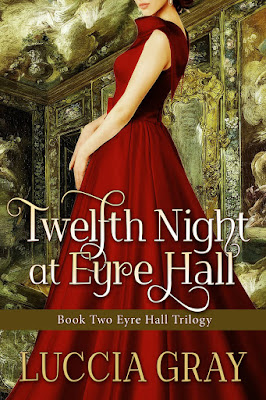 Following Edward Rochester’s death in All Hallows at Eyre Hall, Jane Eyre, who has been blackmailed into marrying a man she despises, will have to cope with the return of the man she loved and lost. The secrets she has tried so hard to conceal must be disclosed, giving rise to unexpected events and more shocking revelations.

Romance, mystery, and excitement will unfold exploring the evolution of the original characters, and bringing to life new and intriguing ones, spinning a unique and absorbing narrative, which will move the action from the Yorkshire countryside, to Victorian London, and across the Atlantic Ocean to Colonial Jamaica.

I loved Jane Eyre when I first read it and was not too sure what to expect with 'Twelfth Night At Ayre Hall', especially as I hadn't read the previous novel 'All Hallows at Ayre Hall'.  I was pleasantly surprised. Luccia Gray manages to convey the same atmospheric atmosphere as the original, although of course Jane has changed and evolved and seems more self assured than she used to be, although she was always a strong woman, but now she is  now even more confident and assertive.

I was a little saddened at the disclosures of Edward Rochester's less than virtuous character, since I fell rather hard for him in the original Jane Ayre, but then Luccia Gray is not the first author to hint that his treatment of the original Mrs Rochester, Bertha, was, at least in part, responsible for her mental instability, and that although he obviously has his good points, he had many faults as well.

The switching of POV in each chapter threw me a little to start with, especially since the narrative is all told in the first person, but it soon becomes apparent in which person's 'head' we are, with each switch, and I did not find it hard to follow. The characters themselves are all well drawn and mostly likeable in varying degrees, The story moves swiftly, and one becomes acquainted with new characters who were not in the original book, including Jane's young daughter, who was given up at birth, and whom Jane believed had been stillborn.

While not exactly ending on a 'cliff hanger', the story does leave the reader wondering what happens next, and I will be looking forward to reading the next book in the series.

I give this four and a half stars and recommend it as an enthralling and entertaining read. 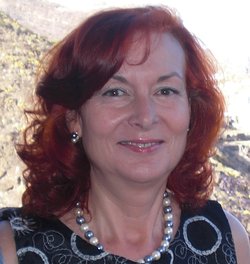 About Luccia Gray
Luccia Gray was born in London and now lives in the south of Spain with her husband. She has three children and three grandchildren. When she's not reading or writing, she teaches English at an Adult Education Centre and at the Spanish National University

a Rafflecopter giveaway
Posted by Hywela Lyn at 00:00:00