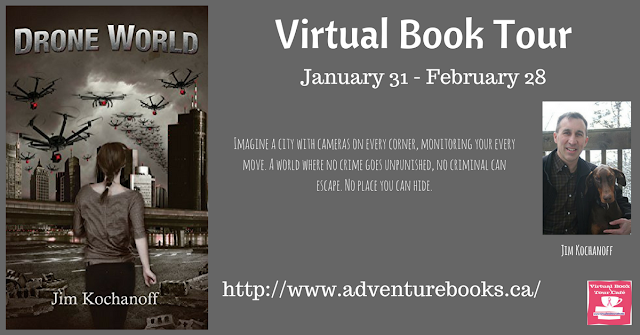 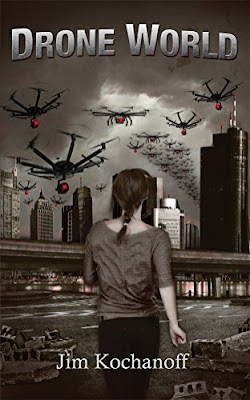 The novel “Drone World” is set in a futuristic dystopian city like the books of Divergent or Maze Runner. The book’s content is similar to the movies ‘Minority Report’ (predicting crime) meets ‘Logan’s Run’ (authority determines when you die).

This book is topical – it looks at a city where drone technology is common place. Today drones are part of our lives from the military to enforcement to entertainment. Not just outside our windows – everywhere we live, eat, shop and the many forms they take.

Imagine a city with cameras on every corner, monitoring your every move. A world where no crime goes unpunished, no criminal can escape. No place you can hide.

I live in the safest city in the world . . . until I tried to leave it.
Excerpt:
Big mistake. Its circuits fired and it spiraled limply to the ground. Its legs kicked a few times and then its eye went dark. Two enemies down in as many seconds. There was hope for me yet. I looked over at the limp form of the officer.
“Why doesn’t your drone,” I pointed to the half man half machine floating silently, “pick up your partner? He could be dead if he doesn’t get any medical attention,” I said. The smaller officer glared at me but it took his attention away from the useless radio.
“Drones have to be given direction. They can’t think on their own,” he answered defensively.
“Well, your hawk just thought on its own.” I indicated the smoking circuits on the ground. One of its feet stirred slightly.
“They have some artificial intelligence, with an innate response to investigate questionable activities.”
“Curiosity got it killed,” I replied sarcastically.
“Looks like that is going around,” he answered. His intent was not lost on me. His radio sparked to life.
“All units to main level. Multiple explosions throughout city. All drones to staging area for assignment. Situation critical.” The remaining hawk drones flew out down the hall, having received their assignment. They went into a vent and must have flown up to the surface. The man-sized drone began to move off when the officer placed his hand on its shoulder.
“Stay with us,” he commanded. The drone remained in place. I wondered how it decided what commands to listen to and what commands to ignore. We turned to the left, away from the elevator and towards a set of stairs. The officer tried to pull open the door and immediately pulled back.
“It’s hot,” he said to no one in particular and motioned to the drone to go first. The machine reached with its metal hand and pulled the door handle forward. A great rush of heat burst towards us as the fresh air fed the flame. The drone expelled a white foam at the fire, extinguishing it in seconds. Blue smoke replaced the fire and my throat tightened. The officer opened up the side of the drone and pulled out two oxygen masks.
“Take it.” He motioned to me. I coughed and slipped it over my mouth. We climbed the stairs, where the sickly smoke made visibility difficult. There were several minutes of climbing before we reached the ground level, one floor higher than where I was held captive. We opened the door to a courtyard and I surveyed the city. I felt sick. There were fires, a huge crater in a street and people were streaming into the park. What happened while I was captured? How could the safest city in the world turn to this?

Jim Kochanoff’s specialty is action/adventure, putting the reader into adrenaline driven stories. His first novel “Men of Extreme Action” is based on the action movie industry and is signed with Toonz Animation of India to be produced as an animated television pilot.

He is the former production manager of the animated children series, “The Hippo Tub Co.” airing on the CBC and created by Canadian musician Anne Murray

He is the Chairman of the Nova Scotia SPCA and uses the proceeds from his children’s book towards this worthy charity. He is Chartered Professional Accountant (CMA) and works for the Nova Scotia Department of Health and Wellness. He has a beautiful wife, Avai, an entertaining daughter named Jaya, and an extremely fast doberman named Lola

For insider news and subscriber-only info, subscribe to my occasional Newsletter. I promise not to spam and your in-box will only see an email from me every 3 or 4 months or so - unless of course I have something really Newsworthy to share! http://madmimi.com/signups/196357/join Every new subscriber will get a FREEdownload of my fantasy novella 'Dancing With Fate' (If this doesn't arrive within two days just email me at hywelalyn@btinternet.com)
Posted by Hywela Lyn at 08:00:00