#WeWriWar, Snippet Sunday - Children Of The Mist: Can Vidarh save himself?


This snippet carries on a bit further from last week's snippet which you can read
HERE  As usual I have used some creative punctuation, not in the published version, in order to comply with the sentence count.


Vidarh is in a perilous situation, capsized in an underground river and caught in the current. He desperately needs his guide, Tamarith, to send him the co-ordinates of her location. 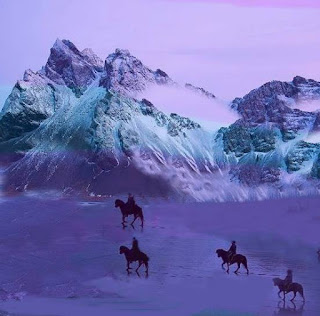 Tamarith! Into his head came a shimmering picture of mountains and a snowy plain beyond, like the one he had recently crossed. A path before the mouth of a cave wound down the declivity to the plain, he closed his eyes and forced himself to concentrate on the image, while trying to keep his head above the water.

The mountains and the plain solidified in his mind. He saw a group of people gathered at the entrance to the cave, halfway down the craggy slope with four sturdy ponies stood tethered a short distance away.

Vidarh struck a barrage of water with a force that winded him.Myriad rainbow colours flashed before his eyes, and for a nanosecond, he sped through a vortex of black nothingness, sucked through the eye of a raging whirlwind. He hit hard ground and rolled over onto his side. A few moments passed before he could catch his breath and scramble to his feet. He stood in embarrassment, aware of the slightly shocked expressions on the faces of the three people gathered before him.

Two minds united against a common foe. Two hearts afraid to show their love: Long ago Tamarith fell in love with a man she can never have, and is convinced she will never love another. However, she cannot help but be intrigued by a handsome stranger whose psychic powers exceed even her own.

For insider news and subscriber-only info, subscribe to my occasional Newsletter. I promise not to spam and your in-box will only see an email from me every 3 or 4 months or so - unless of course I have something really Newsworthy to share! http://madmimi.com/signups/196357/join
Posted by Hywela Lyn at 00:51:00