This snippet carries on directly from last week's snippet which you can read
HERE
As usual I have used some creative punctuation, not in the published version, in order to comply with the sentence count.

The last sentence last week was Tamarith's telepathic query to Vidarh: It's about yesterday...


I thought it might be. Vidarh's lopsided smile looked rather half-hearted, I realize it was not the most dignified way for a guest to arrive, I rather expected to have to explain it to your brother.

She allowed her own faint smile, it was just as well she had shielded her thoughts of a moment ago, Vidarh was very perceptive. Gullin has a great deal on his mind at the moment and is probably more polite than I am, I'm just curious. Forgive me if it sounds like I'm prying. I mean...teleportation? Levitation is one thing, but not many people can actually teleport.

I didn't know I could, myself, until recently, I used to do short 'hops' as a boy and thought it was something everyone did. It was only when I realized the other children of my age didn't teleport that I began to think there was something wrong with me and stopped doing it. Vidarh paused, looking at her with eyes that did not lose their sparkle, although a shadow crossed his face. 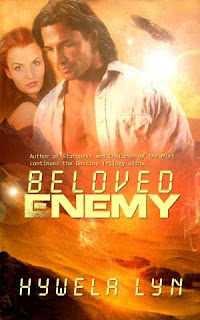 I hate to ask for votes again - and thank you if you voted in the first round. I'm thrilled to say that the cover of Beloved Enemy by WRP cover artist Rae Monet,  is a semi finalist and if you could possibly give it another quick vote I would be hugely  grateful. Thanks so much in advance, I really appreciate all your support!

https://authorsdb.com/2017-cover-contest-results/23388-cover-contest-2017-beloved-enemy
(Voting ends Sunday 5th November)
CHILDREN OF THE MIST: BLURB
Two minds united against a common foe. Two hearts afraid to show their love: Long ago Tamarith fell in love with a man she can never have, and is convinced she will never love another. However, she cannot help but be intrigued by a handsome stranger whose psychic powers exceed even her own.

For insider news and subscriber-only info, subscribe to my occasional Newsletter. I promise not to spam and your in-box will only see an email from me every 3 or 4 months or so - unless of course I have something really Newsworthy to share! http://madmimi.com/signups/196357/join
Posted by Hywela Lyn at 23:22:00