Weekend Writing Warriors - #SundaySnippet - Beloved Enemy, The Destiny Trilogy Book 3 ... "I should go now, while I still can."

Here's the next snippet from the third book in the Destiny Trilogy. Thanks so much to everyone who has been following this series, and stayed with me xx
(A little mutilation of punctuation to keep within the allowed sentence count.)


You can read the previous snippet of  Beloved Enemy HERE  (This week's excerpt is a few sentences later.)

The story so far - Cat Kincaid has crashlanded on an unknown and seemingly hostile planet, apparently in the middle of a gun battle in the not-too-far distance.  One man appears to be fighting the assailants alone, the other, and their wounded companion having disappeared under cover of the smoke capsule Cat activated. Now the lone fighter appears to have been hurt - or dead!

She should have been long gone. I should leave now, while I still can.The effects of the smoke capsule she’d released would not last long, already the air was becoming clearer. She turned once more and trained her viewer back on the clump of rocks; the man in black lay motionless.

Leave him. Leave him and get out of here. If she was right and he and his companions were human, presumably they’d have some sort of transit ship, unless their starship was small enough for planetary landings. Either way, they’d surely come back for him. Then it dawned on her that if they returned, perhaps she could persuade—or force—them to take her with them. If he was alive, he’d serve as a bargaining chip. 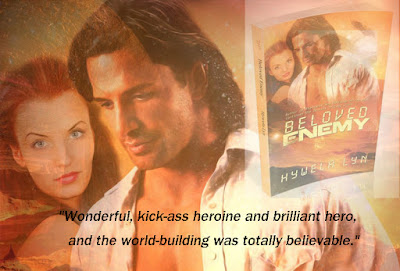 
Kerry Marchant, haunted by memories, regret, and self-blame, shields himself from the pain of the past by committing himself totally to the starship, Destiny, of which he is part owner. However, the beautiful, red-haired woman who reminds him of his lost love, and who he suspects is working for a corrupt regime, represents a possible threat not only to the ship, but to his heart.

For insider news and subscriber-only info, subscribe to my occasional Newsletter. I promise not to spam and your in-box will only see an email from me every 3 or 4 months or so - unless of course I have something really Newsworthy to share! http://madmimi.com/signups/196357/join
Posted by Hywela Lyn at 23:33:00