Writers share an 8 to 10 sentence snippet on Sunday each week. Be sure to visit the amazing writers in this group and leave them a comment if you can - they're listed below:

Here's the last snippet from the third book in the Destiny Trilogy. Thanks so much to everyone who's been leaving comments on these snippets. xx

The story so far - Cat Kincaid has crash-landed on an unknown and seemingly hostile planet, apparently in the middle of a gun battle.  Seemingly deserted by his companions, one man fights the assailants off alone until he is hit. When the firing ceases, Cat decides to go to his aid. This is the last snippet from this book - but I thought I'd leave you with a picture of Cat's much loved animal companion, Shifter. (He's not as fierce as he looks, unless provoked! Also includes a tiny snippet from a later chapter.) 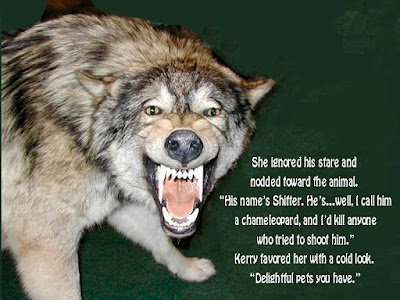 
A silver chain hung around his neck with a small oblong metal capsule. Cat hesitated for a moment, before curiosity got the better of her, and she flipped open the lid. A soft, cushioning material lined the interior. She tipped the contents into her hand—a tiny gold cross and a locket. A quick glance at the inside of the locket revealed the portrait of a young woman with short dark hair curving in soft waves to frame her face, blue eyes, and a long, aquiline nose. The family resemblance looked too close for it to be a wife or girlfriend, so perhaps the image portrayed his sister or mother. Swiftly, she replaced the two items.

As Cat bent over him, her hair, now loosened completely from the scarf, swung forward, and she shook it back from her face with an impatient gesture.

She took her knife from her belt, and inserted the point into the material of his tunic. At once, a hand reached up and grabbed her wrist, with fingers like cold, carbon steel.


Kerry Marchant, haunted by memories, regret, and self-blame, shields himself from the pain of the past by committing himself totally to the starship, Destiny, of which he is part owner. However, the beautiful, red-haired woman who reminds him of his lost love, and who he suspects is working for a corrupt regime, represents a possible threat not only to the ship, but to his heart.

If you've enjoyed these excerpts and would like to read the first few chapters, you can find the free preview HERE

Purchase all three books in the Destiny Trilogy (or just one, they stand alone, while sharing some of the same characters, each is complete with its own HEA)


(You can also read a  character interview with Cat at

For insider news and subscriber-only info, subscribe to my occasional Newsletter. I promise not to spam and your in-box will only see an email from me every 3 or 4 months or so - unless of course I have something really Newsworthy to share!
Posted by Hywela Lyn at 01:10:00