The Mystery of the Disappearing Dog

It's been a while since I've posted anything personal on this blog. The last couple of years have been difficult and I haven't done much more here, than a bit of promotion for my fellow authors.This post isn't about writing or books though, it's a funny story I thought I'd share with you - although it didn't seem funny at the time. 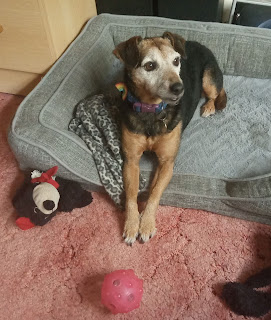 This is my little dog, Choccy, who I've mentioned on this blog before.  Thanks to Choccy, I didn't get much sleep the other night.

We have a bedtime routine. I let him out to do what a little dog has to do, last thing at night, then he has a couple of small biscuits eats his supper while I wash and get ready for bed. He usually  goes into his crate and waits for me to call him when I'm ready to get into bed. (Since my late husband passed away, Choccy has taken to sleeping on the bottom of my bed).

This time when I called him he didn't appear. I got out of bed and looked into the crate and couldn't see him. However he tends to cover himself with the blankets, and sometimes sleeps in the crate for a few hours before joining me, so I felt around but couldn't feel him and even with the light on, it's difficult to see inside the crate, so just in case he'd managed to shut himself in one of the other rooms, I checked them all, the kitchen, the living room, my writing room, even the bathroom, but there was no sign of him and no answering bark when I called him. I even opened the door into the garden in case he'd somehow sneaked out, although there was really no way he could have got out once I'd locked the door for the night.

I decided he must be asleep at the back of his crate under all the blankets, even though I couldn't see him, and went to bed slightly puzzled. I didn't get to sleep until after 3 a.m. and woke at about 7.a.m., thinking I heared a muffled 'woof' and not sure if I'd imagined it. To my dismay there was no little dog on the bed. I called - no answer. I got out of bed and again looked into his crate, I felt as far back as I could reach, and I was pretty sure there was nothing in there but blankets. Again I checked every room, calling, but no dog. By now I was really worried. Was he ill? Had he got trapped behind a piece of furniture? I checked everywhere, moving chairs, and the settee in the living room. My home is a small bungalow so it wasn't as if there were many places to look. Where on earth was he? How could he have seemingly disappeared into thin air?

The only place left to search was the garden. Poor Choccy, had he somehow been out all night? Why hadn't he barked to ask to be let in? Had something awful happened to him? I went back into the bedroom and started to dress to go outside (Yes I had looked all around the bedroom and the bed has drawers so there was no way he could have got under the bed.) "Please let me find him," I prayed silently, trying not to panic "let him be all right." All at once the thought came to me - there was one door I hadn't tried.

I rushed into the hall and opened the airing cupboard door - and out bounced a very lively Choccy! Phew, the relief! I remembered then - I'd left the door ajar for a few minutes while I went to fetch some laundry to air before I went to bed, and he must have snuck in and gone to sleep on some towels I had piled up at the bottom. Well I needn't have worried about him being cold that night - and if he ever goes missing again, the first place I'll look will be the airing cupboard! 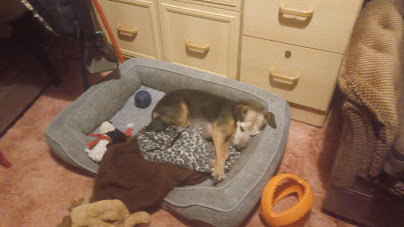