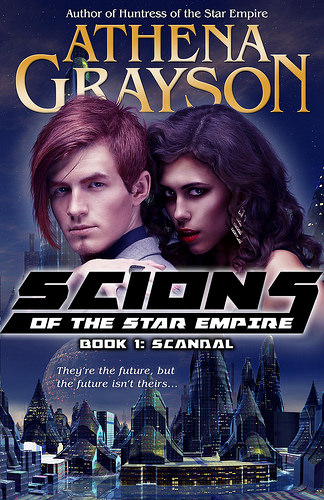 Blurb: Nothing infuriates Princess Ione Ra more than having someone else take control of her reputation from her, and her old nemesis--gossip journalist Jaris Pulne--is poised to do just that with pilfered pics of her caught in a compromising position with her power-couple partner. As someone who's no stranger to manipulating the markets on her own social life, Ione knows the wrong scandal means social suicide. For the other half of the power couple, Den Hades, his survival has depended on staying in his powerful father's shadow in order to protect his secrets. But on the very night of his one chance to earn a shot at becoming a Scion--and freedom from his father's ambitions, scandal threatens to tear him from Ione, or worse--force them together before their time. Damage control turns into danger when their attempts to retrieve the images lead them both into the dark underbelly of the glittering city-planet, exposing secrets of both friends and foes that could lead to more than just social suicide.

Scandal is only 0.99$ for a limited time! You can find all the buy links for this book here.


Excerpt Fool’s Gambit ©2016 Athena Grayson Denaat Hades held his blade extended, his arm outstretched. He held the lunge on one burning thigh muscle while he stood in near-complete darkness, waiting for the spectacle to begin. The landscape of the party had given way to the evening’s main event—an exhibition duel and bladework demonstration between himself and the Academy’s Blademaster with a twenty-five year record. Gone were the ornamental topiary plantings that created nooks and alcoves for socializing, and gone was the impressive display of fine foods and the waterfall made from champ-ale bubbling and fizzing over cut-crystal held under pressurized glass until it burst out of the pursed lips of a crystal nymph into glasses for guests. They’d been discreetly cleared away for anti-gravity pods holding comfortable seating for up to a dozen guests.

The pods jockeyed for position along x, y, and z axes based on the credit amounts donated by their occupants, except for the single, stationary pod holding his instructors and closest classmates, fixed to the floor at the edge of the ring of drones generating the light field for the dueling area. Gone also was his shiny, holo-patterned suit and the starsilk shirt beneath it, and the ornamental lights in his hair. His finery—picked out by his class’s style consultant to display his status and wealth—was stuffed into a storage container in favor of light, form-fitting carbon-fiber armor, with a matching face mask. Gauntlets secured to his wrists generated power for the sensors emitting an electro-mesh shield around his body that shifted with the movements of his off hand. His weapon, an elegant blade of wire and light, derived its power from his main hand gauntlet and the glove that protected his hand. Tuned to full, the blade could melt steel or puncture the transparent alloy that made up the dome above his head. Thankfully, this was an exhibition duel. The blades would sting, but not incapacitate or kill.

He waited, holding his ready position, as the banners came down, displaying his family’s banner, with the twinkling ribbons of support from classmates and other interested parties, and the Academy banner, under which Master Kenndar dueled. Tradition kept the Academy banner free of ribbons, but his neural interface told him the odds of his loss were just under fifty percent. The markets were calling this a close thing and the players in the markets were nothing, if not savvy odds-players. The lights came up around the ring, plunging the shifting observation cars into darkness as Master Kenndar entered from the other side of the oval. He took his cue to step forward, meeting his opponent in the center of the ring. He executed the formal bow, hand-grip, and blade salute deserving of a worthy opponent and prayed his master’s teachings weren’t wasted. He returned to his ready position to await the chime beginning the match, but not before he glanced towards the stationary box and spotted her in the front row, the lights in her hair twinkling in time with the flashes of crystal on her dress.

Ione wore a small smile of bored amusement, echoing the expressions of probably everyone in the audience, and he knew their thoughts. Yet another Academy student, ready to show off for status and praise, as if the privileges of his born position didn’t already come with their own accolades. His gaze flicked to the VIP box and he saw another bored, slightly amused expression, only he knew this one masked keen interest. As if the man sensed his scrutiny, Invicti Hades lifted one eyebrow and Den heard the words as surely as if they’d been broadcast for all to hear. What new way have you found to disappoint me? The lurking paranoia he’d lived with for ten years summoned itself to the forefront of his awareness as the lights in the arena changed to a soft blue.

The chimes sounded for Ready and Arm, and his blade flared to golden life. Across the ring, Master Kenndar assumed his own ready position. Den felt the eyes of the spectators crawling over him, adding weight to his protective gear. Waiting for him to fail. The last chime sounded. Engage! He leapt forward, his awareness extended out to the blade’s end, as he’d been taught and trained by Kenndar to do for ten years. And knew he’d made a mistake. 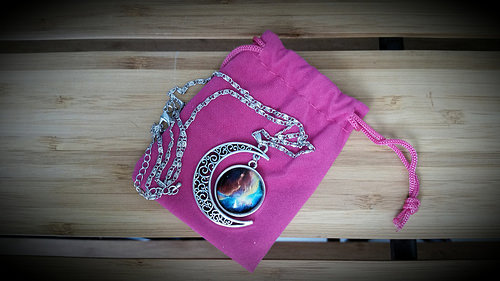 Series Blurb for Scions of the Star Empire:


They can have anything they want...except a future. The children of Landfall's powerful nobility have all the wealth and privilege of their family status, but there's only one thing that will give them true freedom--the title of Scion. The only way to earn it is by carefully managing the social influence markets that rank them according to their accomplishments. At the exclusive Landfall Cultural Academy, the heirs compete to elevate their status high enough for the Cultural Trust to grant them the title and the freedom to make their own way, and scandal is as good as scholarship.

About the Author: Athena Grayson likes kickass heroines, big-brained and sexy beta heroes who aren't afraid of strong women or their own feelings, and stories that turn the genre tropes sideways.

Giveaway There is a cover reveal wide giveaway for the cover reveal of Scandal. The giveaway is open international. These are the prizes you can win: - a galaxy pendant (picture below) - a $5 Amazon gift card

For insider news and subscriber-only info, subscribe to my occasional Newsletter. I promise not to spam and your in-box will only see an email from me every 3 or 4 months or so - unless of course I have something really Newsworthy to share! http://madmimi.com/signups/196357/join Every new subscriber will get a FREEdownload of my fantasy novella 'Dancing With Fate' (If this doesn't arrive within two days just email me at hywelalyn@btinternet.com)
Posted by Hywela Lyn at 00:30:00