#WeWriWar, Snippet Sunday - Children Of The Mist: The underground river

I'm currently sharing excerpts from Children Of The Mist the second book in
The Destiny Trilogy.

Vidarh is on his way to Gladsheim, the capital city of the icy planet Niflheim. A telepath, like all Nifls, he is being guided by Tamarith, through the treacherous mountain passages. (Alittle licence with punctuation to keep within the sentence limit.)

You don't have far to go, I will keep sending you the directions, you should be near the river now.


Be careful--we had heavier than usual snowstorms last winter. With the coming of spring, the melting snow and ice has swelled the volume of water.

Vidarh made his way along the tunnel, partly guided by his telepathic link with Tamarith, and partly by his own senses. Eventually it widened out into a 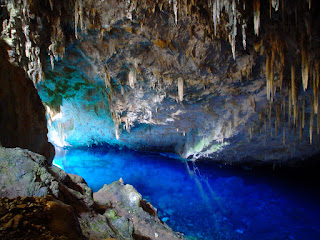 large cave, through which the underground river roared as it cut its way through the mountain.

On the shingle of the boulder-strewn shore, several small boats bobbed against their moorings. After ensuring his pack was securely fastened around his waist, he climbed into one, and lashed the torch to the prow. He cast off, and took up the paddle. The river bore the craft along at a tremendous rate and it needed all his skill and attention to save the craft from dashing against the rocks.

***
Purchase all three books (or just one, they stand alone, while sharing some of the same characters)  at https://www.amazon.com/gp/bookseries/B01MRY3XXT

For insider news and subscriber-only info, subscribe to my occasional Newsletter. I promise not to spam and your in-box will only see an email from me every 3 or 4 months or so - unless of course I have something really Newsworthy to share! http://madmimi.com/signups/196357/join
Posted by Hywela Lyn at 23:45:00