This is my stop during the blog tour for Running Out of Space by S.J. Higbee. This blog tour is organized by Lola's Blog Tours. The blog tour runs from 11th till 31st October. You can check see the tour schedule here.

For a limited time Running Out of Space will be only $0.99 on Amazon

I'm thrilled to feature a fellow 'Brit' author, S J Higbee on the Flight Deck today, and to be able to help celebrate her release day! Congratulations and wishing you many sales, Sarah!
(Replicator -  a celebratory drink is called for, I think!)

Now I think it's time you heard from Sarah Higbee herself. Over to you, Sarah -

Thank you so much Hywela for taking part in the blog tour for Running Out of Space and letting me loose on your blog to answer your question –
"I'd be interested to know if this was always intended to be a trilogy or just developed that way from the first book."

The inspiration for writing Running Out of Space came from listening to Regina Specktor’s song ‘Samson’ which I fell in love with the first time I heard it. I then vividly dreamt the opening sequence of the book, deciding it would make a great short story. That was my excuse for dropping the project I’d been working on and continuing with this one. However, a week and six chapters later I knew it would be a novel. And very quickly after that, I knew it would be a trilogy. 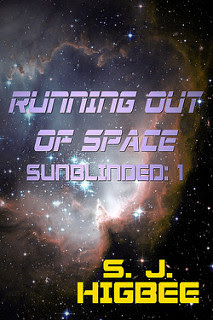 There were two main strands I wanted to explore. The first is Elizabeth’s personal journey where she is consumed by her longing to serve as an officer on her father’s ship, Shooting Star. Living at home and helping her alcoholic mother with her five younger brothers until she gets married and has a large family of her own fills her with horror. So when she is offered the opportunity to serve on her father’s ship, she is thrilled. However, it’s not turning out the way she’d hoped.

Throughout the first book, Elizabeth is constantly reacting to the changing circumstances around her – often with resourcefulness and courage, but she isn’t able to determine her own future. Right at the end of the book, however, she makes a life-changing choice that will hopefully lead her onto being able to take charge of her life.

The next part of her adventures happen in Dying For Space. This book had been thumping around in the back of my head for a while and more or less wrote itself. Breathing Space was the logical conclusion where all the main storylines that occur throughout the trilogy are tied up satisfactorily – apart from a couple of dangling plotlines I intend to pick up again in the spin-off series.

The second major strand is Elizabeth’s personal relationships. She falls in love with Wynn very fast – it is debatable whether she is running towards her chosen lover, or running away from her dysfunctional past. As she matures throughout the next couple of books, there is some resolution about the people in her life as she finally takes control and gets to lead the life she wants, rather than being constantly reactive.

There is also the spinoff series I have planned, where Elizabeth ends up being a P.I. in at least four murder mysteries which will also continue following her personal journey, as well as – hopefully – provide some entertaining whodunits. I’ve wanted to write a crime series set in space for a long time and sat down to plan out my protagonist when Himself looked up and said, ‘Why don’t you use Elizabeth?’ And the moment he said it – I realised it would work really well. As luck would have it, I hadn’t then completed Breathing Space so was able to just tweak some of the plotpoints in the second half of the book to set that up. I’m hoping to publish the sequel to Dying For Space, which is the sequel to Running Out of Space in December.

Thank you, Sarah, that was a fascinating insight into how the series developed. It seems the series grew naturally from events in the first book (unlike my own trilogy, which grew from a short story because I couldn't bear to say goodbye to my characters! 😉) I love the idea of a 'sequel to a sequel' too, and a  crime series set in space will, I'm sure, tick a lot of boxes for a lot of readers, including myself. It sounds like you have a wonderful series going here, and I wish you much success with it!

Now let's find out more about the first book!

Running Out of Space (The Sunblinded Trilogy#1)

I can’t recall whose idea it was. Just that me and my shipmates were sick of wading through yet another unjust punishment detail. So we decide to take ourselves off on a short jaunt to the lower reaches of Space Station Hawking to prove that fertile English girls can also deal with danger.

The consequences of that single expedition change the lives of all four of us, as well as that of the stranger who steps in to save us down in lawless Basement Level. Now I have more excitement and danger than I can handle, while confronting lethal shipboard politics, kidnapping, betrayal. And murder.

You can find Running Out of Space on Goodreads

You can buy Running Out of Space for only $0.99 on Amazon!

Born the same year as the Russians launched Sputnik, I confidently expected that by the time I reached adulthood, the human race would have a pioneer colony on the Moon and be heading off towards Mars. So I was at a loss to know what to do once I realised the Final Frontier wasn’t an option and rather lost my head - I tried a lot of jobs I didn’t like and married a totally unsuitable man. 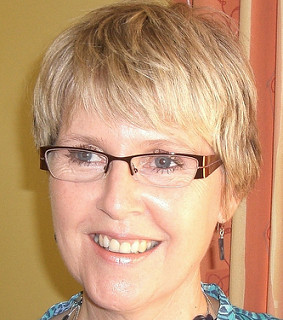 Now I've finally come to terms with the fact that I’ll never leave Earth, I have a lovely time writing science fiction and fantasy novels while teaching Creative Writing at Northbrook College in Worthing. I’ve had a number of short stories, articles and poems published – the most recent being my story ‘Miranda’s Tempest’ which appeared last year in Fox Spirit’s anthology Eve of War. I recently signed a publishing contract with Grimbold Publishing for my science fiction novel Netted, which is due to be released in 2019.

I live in Littlehampton on the English south coast with a wonderful husband and a ridiculous number of books. I can be
found online chatting about books at my book review blog https://sjhigbee.wordpress.com/ and you’re very welcome to pop
onto my website www.sjhigbee.com and my Facebook page https://www.facebook.com/sjhigbeeauthor/