This snippet carries on a bit further from last week's snippet which you can read
HERE As usual I have used some creative punctuation, not in the published version, in order to comply with the sentence count.

The sure-footed ponies picked their way along the narrow mountain path and Vidarh shivered against the sharp wind, his sodden clothes clinging to him, heavy and uncomfortable, chilling him even further. On reaching the foot of the mountain they urged the ponies into a mile-eating gallop, the exhilarating pace lifting his spirits and making him less aware of his discomfort. 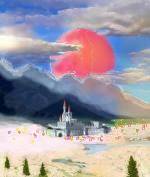 He knew there were questions Tamarith wanted to ask, every now and then, he caught fragments of her curiosity, and that of the others. However, he merely projected back to her that he would explain once they reached Gladsheim and he'd changed into dry clothes.

At last, Gladsheim came into view. Vidarh drew in his breath, the city was even more beautiful than the stories had led him to believe. The mist, which still swirled over the mountains, had not yet reached the settlement. The setting suns cast a golden glow, suffused with touches of pink and crimson. Elegant houses, ranged around a long, narrow lake beneath snow-capped peaks, stood bathed in the ethereal light. Mosaic paths wound between tinkling fountains, and shrubs and flowers grew in profusion, despite the fine sprinkling of snow on the ground.

BLURB
Two minds united against a common foe. Two hearts afraid to show their love:
Long ago Tamarith fell in love with a man she can never have, and is convinced she will never love another. However, she cannot help but be intrigued by a handsome stranger whose psychic powers exceed even her own.