This is my stop during the book blitz for Destiny’s Gambit by R.J. Wood. This book blitz is organized by Lola's Blog Tours. The book blitz runs from 5 till 11 February.
See the tour schedule here. 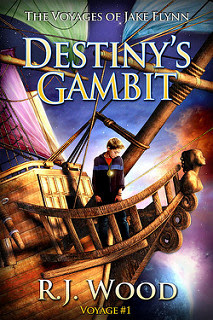 Destiny’s Gambit (The Voyages of Jake Flynn #1)
By R.J. Wood

Jake is directed to a derelict sailboat in a field. He watches in awe as the talisman knits ropes and sails for it out of golden energy. Awash in light, the boat sails up into space, and the voyages of Jake Flynn begin.

During the quest to find his parents, Jake encounters space pirates in tall sailing ships, channelers that can wield energy like magic, and evil cabalists led by a sinister snake-woman. Assisted by a young healer and her aged protector, a spirited cabin girl, and a salty space captain, Jake learns that he too can channel, and that he is central to stopping the cabalists from resurrecting a long-dead evil

Puzzles, a pirate asteroid, walking the plank, fantastic magic, traps, treasure caves, multiple planets and great ship battles – Jake must experience them all on this epic sword and space adventure.

By the end, Jake will discover the truth about his destiny, realize that family can transcend blood lines, and understand that his own needs are sometimes less important than those of others.

REVIEW
It's a little difficult to categorise this very original and gripping story. It's part Science Fiction Adventure, part Fantasy and has a very Steampunk feel as well. The protgonist is a twelve year old boy so I guess it's intended for older children and young adults. Anyway, as a 'much older' adult I enjoyed it very much although the occasional incident of 'telling' rather than 'showing' and the odd 'headhop' drew me out of the story at times, but not enough to spoil what is actually a 'rattling good yarn'.

Briefly, the story concerns the boy, Jake, whose parents have mysteriously disappeared, and he lives with his rather stern Uncle and kindly grandmother. When, on his twelfth birthday, he finds a talisman and a message from his father he sets off immediately to find them. His adventures take him into space, where he encounters an evil snakewoman, makes some interesting friends, and becomes involved with pirates, space battles and visits various strange and dangerous planets

I loved the idea of an old time sailing ship being able to travel through deep space, thanks to Jake, the young hero's newfound ability to 'chanel' his special talents to power the ship. It's not without a scientific 'rationale' either as some of the companions he meets on his first visit to another planet are also able to 'chanel' and they are able to form a bubble of air around the ship and also to control the pressure and temperature so they don't freeze to death. The author clearly has a very thorough knowledge of all things nautical and the descriptions of the ships, their weaponry and handling are put across in a way that makes the reader feel he or she is taking part in the voyage themselves. 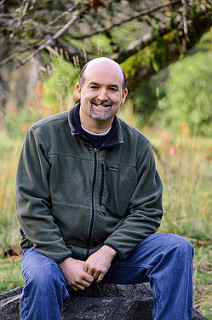 I was sorry when the book ended - I'm not too keen on books that aren't actually complete, and I had expected Jake to conclude his search for his parents - but it seems I have to wait until the next book to find out if he is likely to be successful. It wasn't exactly a 'cliff hanger' ending though  but there is obviously more of Jake's story to come in what looks like being a very enjoyble and entertaining series.
*four stars*

R. J. Wood has been creating stories and adventures for others since 1979. A bard at heart, he trained in Drama (BA) and History (MA) while at university. He currently lives near Snoqualmie Falls in Washington State with his wife and children. There he does a little fishing, some adventuring, and of course, his writing.

Like everyone of my generation and beyond I have been heavily influenced by film. I like to think of my books as movies in my mind. I developed my creative writing through fantasy, science fiction, and paranormal RPGs. My degree in drama helps me with story, characters, and especially dialogue. Having an advanced history degree is excellent for plots and characters, but it also helps me with world building.

There is a tour wide giveaway for the book blitz of Destiny’s Gambit. One winner will win a $10 Amazon Gift card.

For insider news and subscriber-only info, subscribe to my occasional Newsletter. I promise not to spam and your in-box will only see an email from me every 3 or 4 months or so - unless of course I have something really Newsworthy to share! http://madmimi.com/signups/196357/join
Posted by Hywela Lyn at 22:58:00