You can read the previous snippet of  Beloved Enemy HERE
(The story so far - Cat Kincaid has crashlanded on an unknown and seemingly hostile planet, apparently in the middle of a gun battle in the not-too-far distance. Cat decides to even the odds a little and fires a smoke capsule, as it clears, she realises there is only one person now, fighting alone. (This snippet is from the hero's p.o.v. )

Where did that damned smoke come from -- Kerry Marchant wiped his streaming eyes and tried to focus on the area where he last saw his attackers.

There was another question—the identity of the third party who seemed to be siding with them against their assailants; he turned back to glance at Jon Quinlan, the main concern, at the moment, was Zeldra. “How is she,” he asked, indicating the unconscious woman.

The other man looked up from his ministrations, coughing and trying to waft some of the choking smoke away with his hand.  “Not good, I’ve used my bioregenerator and it’s repaired some of the damage but we need to get her back to the Destiny.”

“Then take her, at least this smoke will give you some cover, I’ll hold them off here for as long as I can.”

“What? And leave you here to fight them alone?”

“I don’t like the thought of leaving you down here—”

“Have you a better idea -- we can’t both go, we would just be sitting targets  if this smoke clears; I can cover you, but as the Destiny’s commander, you need to be with the ship." 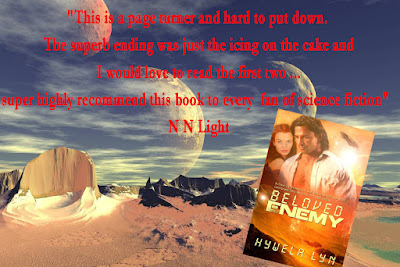 For insider news and subscriber-only info, subscribe to my occasional Newsletter. I promise not to spam and your in-box will only see an email from me every 3 or 4 months or so - unless of course I have something really Newsworthy to share! http://madmimi.com/signups/196357/join
Posted by Hywela Lyn at 00:36:00