Weekend Writing Warriors Snippet Sunday - The Matchmaker's Mare ..the love of her life and her greatest aggravation.

Continuing snippets from my fantasy novel 'The Matchmaker's Mare which takes place in Wales. The  story is told from three p.o.vs. and two time-lines. Today's excerpt is again from Rhiannon's p.o.v. and takes place in the distant past, a few paragraphs along from the last one.

Don't forget to visit the other authors at the link below, there's something for all tastes.

The last time Rhiannon and Sion met, he told her he had Romani family business to attend to on the English border, but he would see her in three weeks. Having consulted her scrying bowl in secret, before she left the cottage, she knew he was now on his way back, but still some distance away.

Sion Sienco—both the love of her life and her greatest aggravation. When she first met the young gypsy lad, he first teased her, and then wooed her. When she feigned disinterest, he took to playing 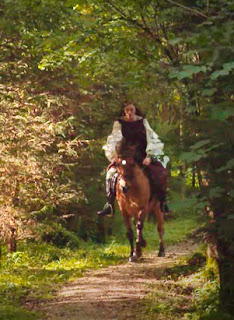 tricks on her, causing her milk cow to go dry, or her hens to take to the water, as if they were ducks. As it dawned on her he too had a little white magic, she scolded him until she was hoarse and ran out of words. Then he took her in his arms and kissed her until she was breathless and told her how sorry he was for causing her so much trouble.

As exasperating as he could be, she knew he loved her and would never let any harm befall her. As she bent over the mare’s neck, feeling the powerful muscles beneath her, she prayed she would find him before her father noticed her absence.

I now have some audio codes for each of the three books in the Destiny Trilogy. If you would like one, or all three, just let me know with your email address at Lyn@hywelalyn.co.uk and I'll send you the ones you request, (Each book has its own code). If could manage to post a short review after you've listened, that would be greatly appreciated. 😍