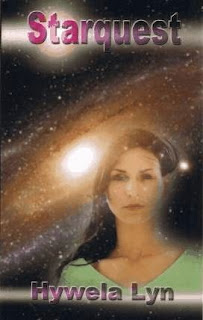 One of the characters from Starquest, Kerry Marchant, kept nagging me to write a story about him.  It's been a very long time coming, but I eventually finished writing and revising it this  year, and having sent it out to a couple of  trusted crit partners who were also authors themselves, and after some final polishing, I sent it off to the Wild Rose Press and tried not to think about it too much.

On Saturday I received a Contract from one of the lovely editors of the Fantasy Rose line, and am thrilled beyond words that the third book will finally see the light of day.  I can't wait to start work on the edits and of course what my cover will be like (watch this space.)

Of  course it's early days yet, but I thought I'd give you a little taste   of Beloved Enemy to hopefully whet your appetite.


To her amazement he smiled, the most devastating smile she had ever seen, and made more amazing because he didn’t look as if he did it very often.

“My own philosophy as it happens.” His eyes narrowed. “It seems almost a pity we are on opposite sides.”

“Opposite sides?” How much did he guess?

“I have no love for the Union. That puts us on opposite sides, even if you are a pirate.”

She gave him her most withering look. “Fine. And just because I decided to save your neck, don’t get any ideas. We don’t have to like each other.”