For the past few weeks I've been sharing excerpts from Starquest, the first of  Destiny Trilogy. Thank you to everyone who's been following and commenting. As I said last week, that was just the beginning of the adventure, although it looked like the end for Jess ... but I won't give any more away *evil cackle*!

Let me now introduce you to Niflheim the home planets of the two telepathic members of the Destiny's crew and where an important part of Starquest takes place. Niflheim is an Earth colony named after the Norse land of mist and cold. Many of the places and inhabitants are also named after characters and places in Norse legends. The descendants of the original settlers developed their powers of telepathy in order to communicate over vast areas having abandoned all technology. Parts of the planet are reasonably temperate and they have evolved a rural lifestyle and an economy based on the bartering of skills and produce.


Author Note: The planet Niflheim was inspired by the sight of the snow swirling like a pink mist over the Welsh Mountains, at sunset. I was writing Starquest at the time and an idea for a planet with pink  snow came into my mind, and the question - how would settlers on a sparsely populated planet communicate with no technology? And so the telepaths of Niflheim were born. Although only a few chapters of Starquest are set on Niflheim, some of the characters seemed to demand their own story, and so 'Children Of The Mist' became the second book in the Destiny Trilogy.  Although several of the characters in Starquest are also in this book it is a complete and separate story, and features Tamarith, a close friend of Jess.

The message from Gladsheim had been clear—Earth Colony Niflheim was in danger. 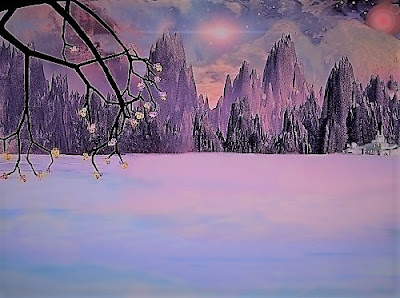 The rider shivered and drew his long coat more closely around him. His pony lowered its head against the wind, picking its way over the snow-covered plain. Vidarh knew he was not alone on this journey—he sensed the presence of others, all making their way to Gladsheim from various parts of the world.

Without warning, a mind connected with his, as sweet as the tinkle of tiny bells.

Greetings, Vidarh of the House of Ragnak, this is Tamarith of the House of Yarvi. I have been assigned to guide you to our fair city. You have come a long way to be with us, and we, the inhabitants of Gladsheim, thank you.

Relieved, he swiftly telepathed his response, Greetings Tamarith. I look forward to meeting you and the others soon.

The rest of your journey is not easy, she replied, but we will guide you. When you reach the other side of the mountain we will be waiting to take you to Gladsheim.


For insider news and subscriber-only info, subscribe to my occasional Newsletter. I promise not to spam and your in-box will only see an email from me every 3 or 4 months or so - unless of course I have something really Newsworthy to share! http://madmimi.com/signups/196357/join
Posted by Hywela Lyn at 23:00:00